Esprit De Corps - If (Would It Turn Out Wrong) 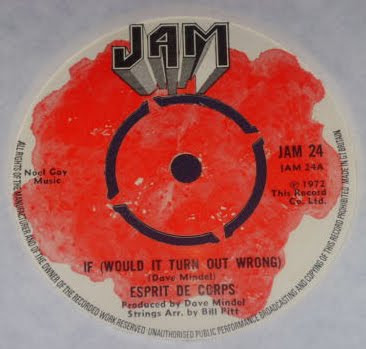 Throughout the eighties, the musical prowess of Mike Read became something of a standing joke for popular culture vultures and viewers of "Saturday Superstore". The presenter and Radio One Breakfast Show host surely had plenty on his career-shaped plate during the period, but he still managed to slip out a few singles under the name The Trainspotters, all of which were met with utter indifference by both critics and the public. "Mike Read and his bloody guitar" almost became a disdainful national catchphrase for Saturday mornings.

At the time, hardly anybody at all referenced the fact that he was also partly responsible for this little-known 1972 flop which was later deemed of a high enough quality to emerge on the "Rubble" series of psychedelic compilation albums. I can only concur, it's actually pretty bloody good. The B-side "Pictures On My Wall" can probably be safely ignored, but "If (Would It Turn Out Wrong)" is one of those psychedelically tinged ballads with an unsettling undercurrent, here provided by the positively woozy phasing on the string section. It's an eerie piece of work which deserved further attention, but clearly never got it, despite sonically encapsulating the giddy, doubtful feelings of love which may possibly be unrequited - far from attempting to be "trippy", I'd argue that the chaps were merely trying to replicate conflicting emotions with the skying effects here.

Joining Mike Read were other music industry dabblers Dave Mindel, David Ballantyne, Bill Pit and Alan Tomes. It would appear that they only managed one more single after this one, "Lonely", before knocking matters on the head. Esprit De Corps are one of a privileged number of acts who appeared on "Top of the Pops" despite not having a hit to their name, so they clearly were given a fair chance by Read's future BBC paymasters, but it obviously came to nothing. As for what became of Read, he was at one point so successful in the eighties that Strawberry Switchblade's record label tried to talk one of the girls into going on a date with him, just to increase their chances of getting one of their records played on the Breakfast Show (they did not comply). It's a far cry from that to this, and no mistake.

I bought this record twice back in the day after seeing them on TOTP's.
I had worn out my first copy with a worn and too heavy stylus . I was able to buy a new copy in Harlequin Records Haymarket in London.

I do wish I could find a better quality release of the song.
The sound quality of the source recording used for the "Rubble" compilation is itself very poor.


With the sonic quality of low-bitrate mp3 not revealing but removing those tonal details those nuances and depth; - I doubt anybody can appreciate the true beauty of the sound textures of this track.

It will probably be time for me to move over to FLAC encodes soon, Joe, but I need to wait for a moment when most readers/ users are happy with them as the default option. I agree mp3s are a less than perfect substitute for vinyl recordings.

Picked up a copy of this at the weekend for 10p at a boot sale, didn't know it but the company sleeve alone was worth the investment. Very happy with my purchase now I've played it. And I think the B side is a cracker too.

My initial reaction on hearing 'If...' for the first time on the radio was that it was by the Moody Blues! The info given by the radio dj was that Esprit de Corps were an Anglo-Belgian group. So was that the story cooked up by Mike Read and his pals? By the time they appeared on TOTP I'd bought the single which I still have. Still a quality track.

I'm not sure where that story stemmed from! It seems unlikely that the group would have falsely publicised the fact that they were anglo-Belgian, and Read had no real reason to cover his identity as his radio career hadn't really taken off at this point (he didn't start hosting shows until 1976).

It would be interesting to see a press release for this record so I could get a better understanding of how they were promoted.

I remember buying this single back when it was released. I thought
...and still think..itcwas a cracking track. Not heard it for years but I can still sing it through in my head :-)