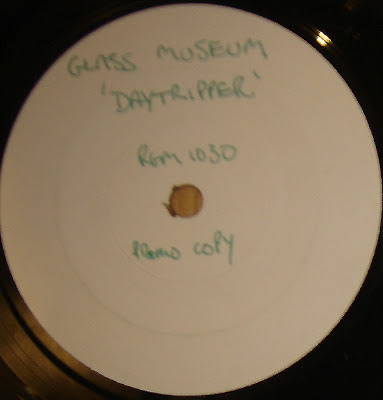 Oh, is there no end to the cover versions of Beatles songs out there?  By now, we shouldn't be surprised - after all, there have been reggae, easy listening, heavy metal and even military brass band covers of Lennon and McCartney, so the addition of eighties synth-pop to the canon can only be expected.

Glass Museum were a pan-European group of session musicians who decided to combine forces to produce a self-released new wave/ synth-pop album - also entitled "Daytripper" - which has now become extremely collectible in certain circles.  Consisting of British members James Clyde and Tony Red,  German Andy Gold and Belgian Walter Mets, their sound was powerful and convincing enough to earn them a support slot with Simple Minds in 1982, and their performances from that period seem to have subsequently become the source of a lot of Internet chatter.

"Daytripper" actually makes a surprisingly convincing piece of synth-pop, the original guitar riff being manipulated to sound like a repetitive early Depeche Mode hook, and the metronomic drum patterns underneath causing floods of eighties (rather than sixties) nostalgia to come flooding back.  It's highly probable that many sixties buffs will find this track horribly offensive and impure, but fans of Tik and Tok's version of "Summer In The City" (already covered elsewhere on this blog) should get an enormous kick out of it.  I did.

As for what became of the various members of Glass Museum, it would seem that the bass player Tony Red went on to work in the Pink Floyd tribute band Think Floyd, whilst the whereabouts of the others is less clear.

Meanwhile, the promo copy I've got is one-sided, I'm afraid - so anyone hoping for anything more than the A-side is going to be horribly disappointed.