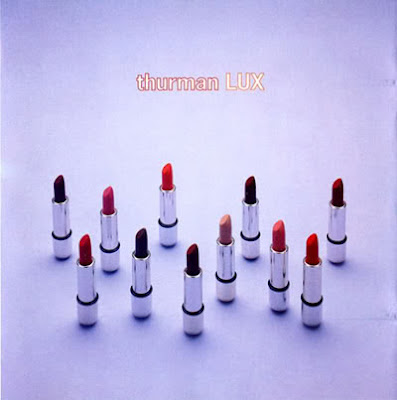 This may turn out to be the least popular blog entry I've ever written on here.  To most critics, you see, Thurman were considered a dreadful band, so mind-bogglingly awful that even their plagiarism was unsubtle.  Their lead singer's hair was mocked in Select magazine (and to be fair, it did look rather like a Royal Guardsman's Busby at one point) the album was derided in the weekly press, and the fact that nobody bought it and it regularly appears in second hand store bargain bins today should surely be no surprise.  It was cursed.

Thurman allegedly bought much of this upon themselves.  Rumours circulated throughout the mid-nineties that they had originally been a heavy metal band who had been asked to change their style to Britpop to get signed.  Wikipedia is still quoting this as fact today.  I feel somewhat ambivalent about this story.  Interfering A&R executives do indeed tamper with the sound of bands regularly in order to get chart action out of them, but a leap from heavy metal to Britpop sounds rather like asking a techno artist to change tack to recording soul ballads.  Why not simply sign one of the several thousands acts out there playing the right genre already?  It may of course be that Thurman did indeed change tack when Britpop was brewing out of their own choices, but they'd be no less guilty of doing that than certain members of Menswear if other popular rumours are to be believed, and the latter didn't exactly have negative press to start with.

Despite this, it's impossible to ignore the fact that "Lux" does sound like a very cheeky, chancey little album, and it's actually that aspect of it which makes me grin from ear to ear at times.  Numerous tracks are so derivative that it's a wonder the band didn't get their arses kicked by a team of lawyers, and in fact I'm sure they would have done had the album sold in any reasonable quantities.  "Loaded" is "Children of the Revolution" all over again, right down to the vocals.  The opening riff to "Cheap Holiday" is as close to "All The Young Dudes" as you can possibly get without directly cribbing every single detail.  There are numerous other naggingly familiar sounding riffs and melody lines throughout the album that show a band determined to pilfer their way through the classic rock catalogue, stopping at nothing.  However, as Elastica were doing much the same thing at the same time to widespread praise for their supposed post-modern daring, why were Thurman rapped around the knuckles by the critics for having keen ears for somebody else's tune?

There have been some rabid online defenses of this record since, but the truth frequently lies between two stools, and in my humble opinion, "Lux" is actually quite a good album - neither a lost classic nor a complete dud, just an enjoyable listen.  There's a gleeful cheek to the whole thing which makes it sound very much of its time even though its clearly in thrall to the past, and rather like the neo-psychedelic bands which littered the eighties, Thurman appeared to be taking elements of mod and glam into their work and parodying them affectionately rather than tip-toeing gently around them.  "Oh... what a luv-er-ly day/ To drink some English Tea" they proclaim during the rather Move-ish track of the same name, banging most of the period details firmly on the head.  Other tracks such as "Famous" chime along in the manner of so many mid-sixties pop 45s, feeling breezy and effortless.

Part of me wants to believe that this album is indeed the work of metallers pissing around and parodying a movement - if so, that makes tracks like "English Tea" pieces of Spinal Tap-esque genius.  Whatever the truth, it's not a bad record, and is probably actually the most typical record of its era that's ever been made.  In the year 2050 when they've finally invented a computer which can produce an album in any style you care to name, and you ask to hear the mighty Hal's version of mid-nineties Britpop, this will be what the great machine spits out, and not "Parklife" like you thought.  Relax with it, and have fun - it's only an album nobody bought.

(Update - this blog entry was originally created in August 2009.  As I predicted, it wasn't a popular write-up with everyone, but not for the reasons I originally suspected.  On the contrary, there were readers out there who felt I should have sold the album more vigorously, with one person arguing that it was up there with "Definitely Maybe" and "Parklife".  I don't particularly want to pour cynical acid over such observations, but I'm afraid I can't agree, and I utterly refuse to budge on my original assessment that this is not a lost classic by any means.

Still, listening to this CD again did cheer me up no end just now, and Thurman sound grittier and sparkier than most of the revivalists on the live circuit at the moment, so I'm far from being completely condemning of the band.

And apparently they were a heavy metal band before this album, too, calling themselves To Die For - strewth. One wonders what Edwyn Collins made of it all).