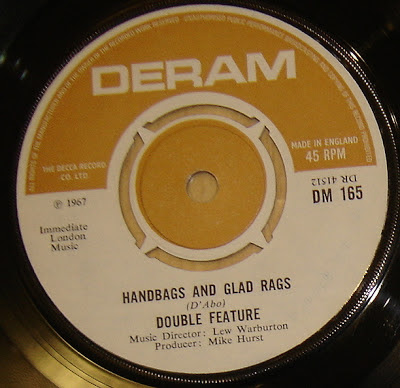 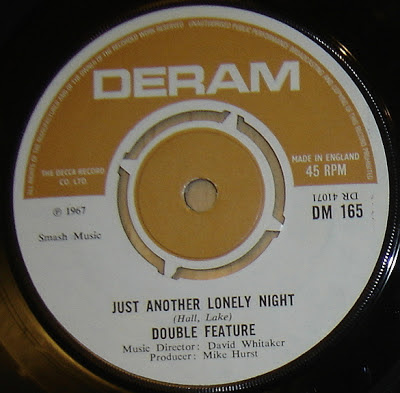 We've already covered Brum psychedelic soul mod-poppers Double Feature on this blog with their brilliant version of Cat Stevens' "Baby Get Your Head Screwed On", and since we're now looking at their second and last release I suspect this is the final time we'll have cause to talk about them.

Whilst I wouldn't want to debate the relative musical merits of their two records, this is by far the more interesting release for fans of pop trivia.  "Handbags and Gladrags", an evergreen song penned by Mike D'Abo of Manfred Mann, was first released by Chris Farlowe who managed a minor chart hit with it.  However, if other sources are to be believed, D'Abo in fact intended Double Feature to record it first, but Andrew Oldham heard an early demo and nabbed it for Farlowe before they got a chance to do their stuff in the studio.  The net result was a single issued on Deram which followed a few weeks in the wake of the other release and subsequently lost out.

If this is true, then we should possibly kick Andrew Oldham for interfering.  Double Feature's version is a hell of a lot better - the woebegone moodiness of the hit recording is replaced by a looping, piano-led sprightliness, some more of that Move-esque cello work which featured on "BGYHSO", and a cracking, percussive urgency and biting vocal delivery.  All the cover versions of "Handbags and Gladrags" we've been treated to since have largely drawn from the sweaty, last-number-of-the-night Farlowe blueprint, when this single clearly shows that it's possible to shake a certain amount of life into the track.

The B-side isn't bad either, "Just Another Lonely Night" being something you could easily imagine having been a Northern Soul spin.  The more I hear of Double Feature, the more I wish they'd had a bit more of a career - either of their singles could have been hits, and the world would have been a better place if they were.  Admittedly though, it's hard to imagine "The Office" using this version of "Handbags" as their template for the opening credits... but if the theme tune performer Big George had been forced to look elsewhere for moody inspiration, that might also have denied The Stereophonics one more unnecessary hit single with their particular facsimile.  It's worth thinking about.