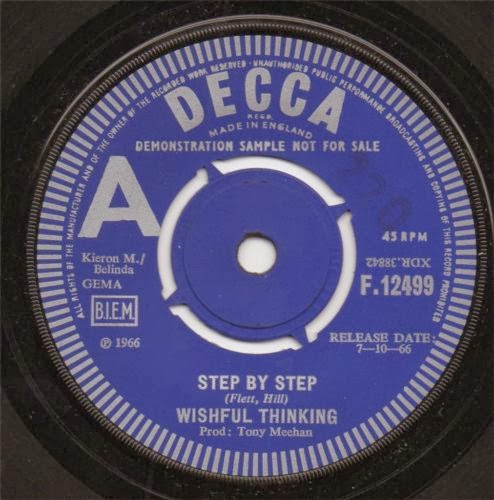 Some time ago now I posted a detailed entry about the history of the British harmony/ beat group Wishful Thinking, and rather than repeat myself for the sake of it on this occasion, it probably makes sense for me to direct you back to that effort.

"Step By Step" is another prime example of the group's typical sound.  Intricate vocal harmonies combine with bouncy, buoyant melodies to produce a single which ended up not doing a great deal in the UK at all.  Produced by Shadows man Tony Meehan, it tugs gently on a variety of popular sounds such as upbeat Alpert trumpet sounds, Beach Boys harmonising and Tin Pan Alley chirpiness, and as such seems as if it would have had the potential to crossover to a wide number of audiences.  Sadly, it was not to be, and it only acts as another milestone on the way to the group's broader success with "Hiroshima" in the seventies.

The B-side "Looking Around" is barely with troubling yourself with at all, but I include it here for the sake of completeness.

Congratulations with your blog, really superb !!!

I have a request, have you the single by the UK band Information with the song " Orphan" ?

Many thanks in advance