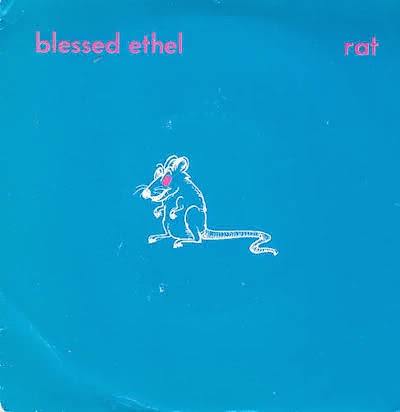 These days, when a consortium of critics and music industry insiders get together to name who the most important artists of the coming year will be, there's little danger involved.  Trends are easy to predict.  Does the band have 768,000 Facebook 'likes' already?  Have they just been signed for a lot of money by a cash-strapped major label who absolutely has to see a return on their investment?  Are they Brit School graduates?  With every year's announcements, you can almost hear the noise of check-boxes being ticked.

It wasn't always thus.  In the nineties, predictions were likely to be very wonky indeed, which is how Blessed Ethel infamously got voted above Oasis as being the band most likely to succeed at the Manchester "In The City" live event.  This isn't as unusual as it sounds.  In the early nineties, suspicions in the music press were rife that Oasis were nothing more than a re-heated baggy band.  Blessed Ethel, on the other hand, had vitriol and a sneering energy which sounded much more of the moment - elements of the still relatively topical Riot Grrrl movement were apparent, and much was made of the band's oddball outsiderness, an absolute virtue in those pre-Britpop days.  The NME and Melody Maker wanted weird kids in the charts back then, not everyman styled stars.

We all know how the story ended.  Blessed Ethel did not conquer the world, but "Rat" gives some clues as to how they might just have given the impression they could.  It's ferocious garage rock capped off with Sara Doran's urgent and hysterical vocals; breathless, desperate and really rather brilliant in its own way.  True, at the time this would have been no more or less original than Oasis' known output, but the full-throttle nature of the single showcases a band keen to leave a scalding great mark.  Compare it back-to-back with an Oasis demo such as "Cigarettes and Alcohol" (one of the limpest, weediest, least representative demo recordings I've ever heard in my life), and everyone's favourite monobrowed pop stars suddenly sound  less fierce, less full of themselves.

As for any musicians reading this who may have recently lost a "Battle of the Bands" contest... take heart.  It means nothing. (Scroll down past the mp3s for another Blessed Ethel single…) 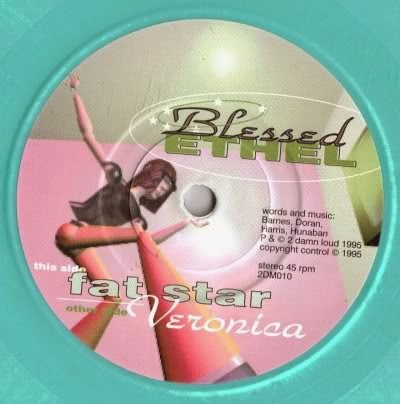 "Fat Star" is a rather more subtle outing for the group, but great nonetheless - simmering with heated paranoia and relying on a central atmospheric guitar riff rather than sheer aggression, it was the band's last proper single. Released a mere year after "Rat" in 1995, the public had had their chance to familiarise themselves with the band and the major labels had seen their opportunities to wave cheque books around, but it seemed all for nought.

A pity, as Blessed Ethel had an oddness and tension about their work which was utterly missing from so many of the nineties 'big hitters'. They had enough of a pop sensibility to cut through, but somehow missed out completely, and one album ("Welcome to the Rodeo") later, it was all over.