The Fenmen - Rejected/ Girl Don't Bring Me Down 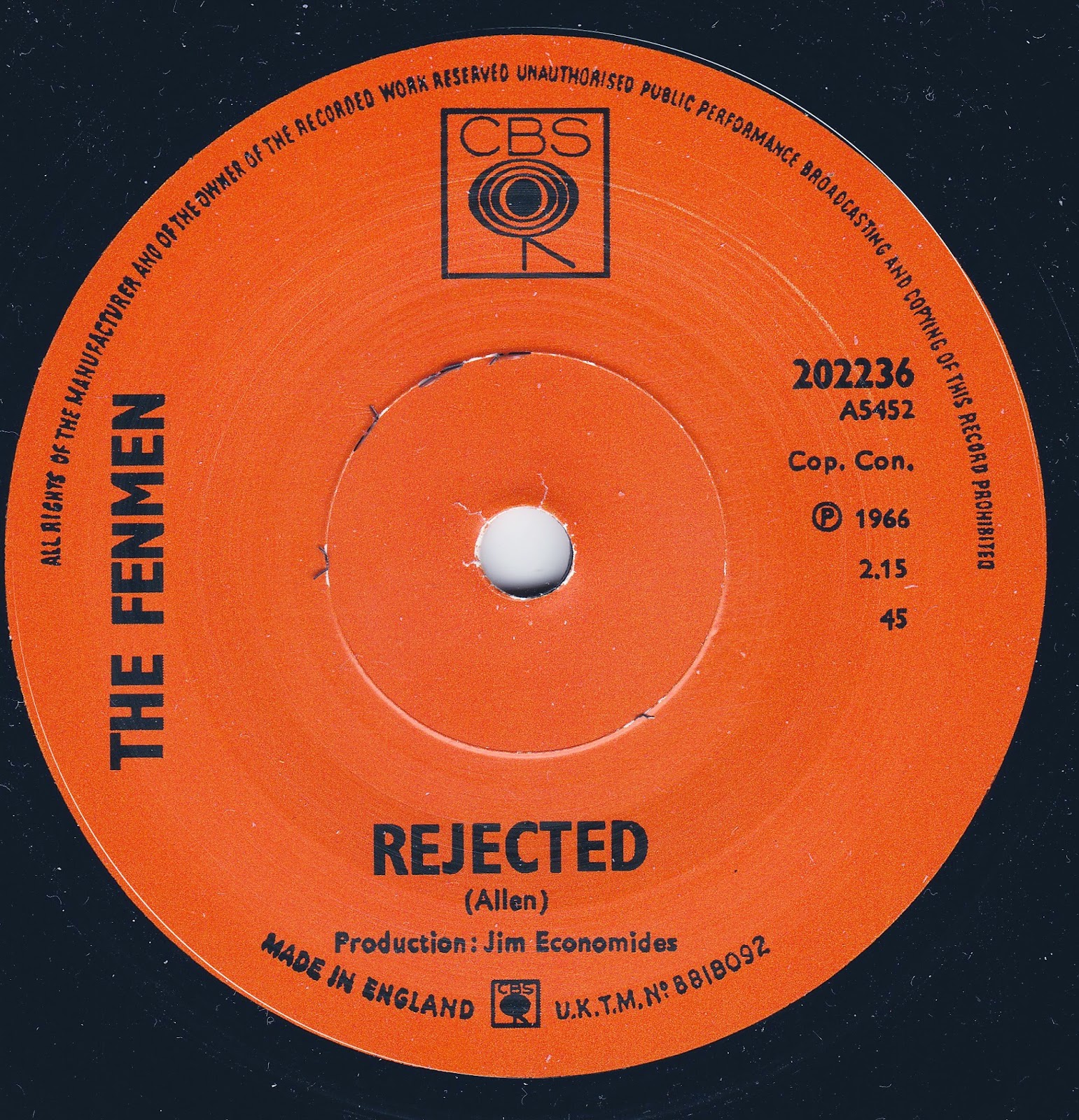 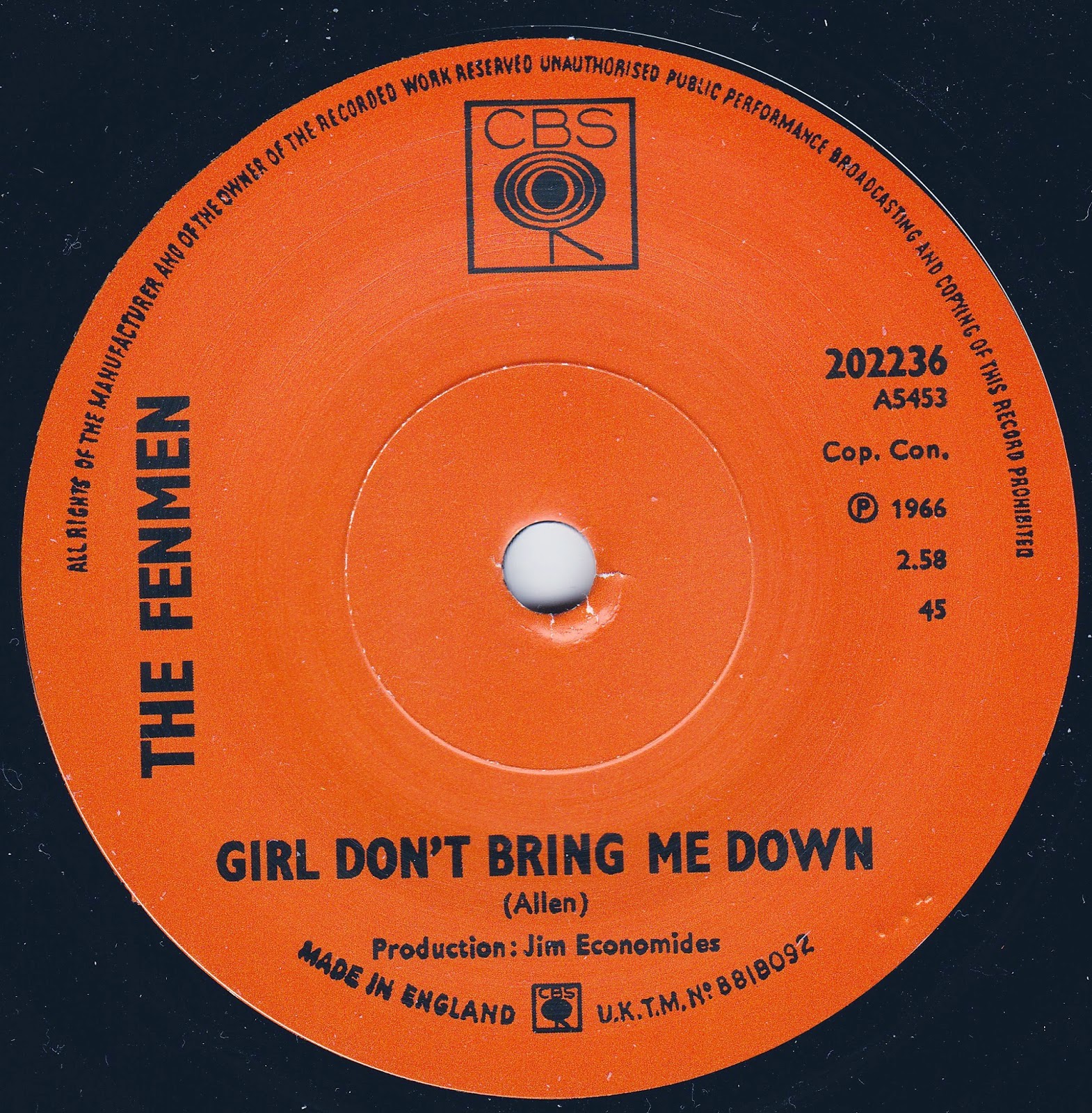 The Fenmen were actual proper pop stars (loosely speaking) for awhile, acting as Bern Elliott's backing group for the 1963 hit single "Money". Having a chipper Merseybeat feel to their records (despite actually hailing from - wait for it - Kent) they sounded as if they could have been one of the upfront beat groups of the time, but "Money" aside, they didn't actually sell many records.

Bern Elliott eventually jumped ship to work with other musicians, leaving Alan Judge, John Povey, Wally Allen, and Eric Wilmer to their own devices. They opted to take a Californian turn with this record, doubtless feeling that having aped the Liverpool sound there was no reason why they couldn't also impersonate Brian Wilson and company. It's a convincing job, actually, albeit one which seems to lack enough of a powerful chorus, but there's no question that it's the sound of strong musicians with an admirable flexibility to their approach, able to harmonise and perform summery pop as well as tough R&B tracks.

After this failed, Allen and Povey moved on to join The Pretty Things, getting involved right at the point where their sound was about to undergo a huge evolution and playing on the legendary "SF Sorrow" album. Neither "Rejected" or "Girl Don't Bring Me Down" hint towards that much, but it's easy to understand how they might have been regarded as a good fit for the band's next phase.

The more eagle-eyed among you may have spotted from the label scans that this isn't an original copy of "Rejected" and looks suspiciously like a bootleg. You're right. It is. I wouldn't have put it high on the list of in-demand rarities crying out for a bootlegged 7" reissue, but what do I know?

This single of The Fenmen, really hard to find

Thank you so much, Albert

They came from Blackfen, Kent, hence 'The Fenmen'

No problem, Albert (and thanks for the added info about Blackfen, whoever made that comment).

More info about The Fenmen

The Fenmen Go to Top


A Kent outfit who'd earlier spent time in Germany and were also known as Bern Elliott and The Fenmen. Their records included covers of The Four Season's Rag Doll and The Mamas and The Papas' California Dreamin'. When they split up in 1968 Povey and Allen joined The Pretty Things

Many thanks for this. By and far this bands rarest single and you've done us a huge favour here by filling in a major gap... when Wally Waller and Jon Povey compiled a Fenmen CD a few years ago, they included all their elusive CBS tracks EXCEPT for the B side here... but there was another catch - they sampled the song and created a new one out of it, so interesting to hear the original recording and the one Fenmen track I was missing. Could never find it on YouTube so great to finally hear it.
Good song actually as was the self penned B side of their previous single "Is This Your Way" which had a great lead vocal by Povey.

Waller and Povey sure helped transform The Pretty Things bringing to them their distinctive harmonies, and with Phil May as the third voice, it created something truly special and unique as can be heard across the 1967 to 1971 output.

Well, this is a turn-up for the books! I'd no idea this one was on so many people's want lists, otherwise I might have acted sooner.

Thanks for all the added information, by the way.