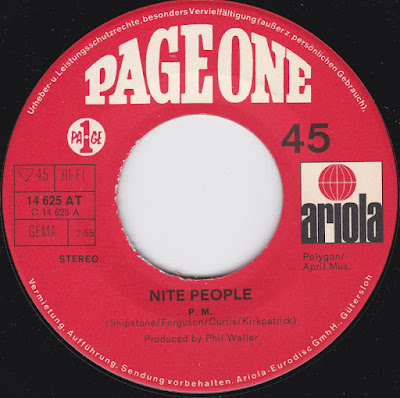 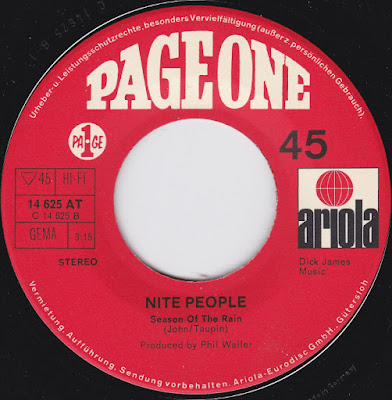 There's a tendency among many music journalists to try to claim that the progression of sounds in rock and pop follow very straight and simple lines. You've heard these ideas many times before - the notion that punk killed progressive rock, for instance, when progressive rock sales had declined by '76 anyway. Genres seldom kill other genres, it's more that rock music progresses, sometimes in the blink of an eye, sometimes at a snail's pace. Punk did not "destroy" progressive rock with one revolutionary slap, punk simply represented a progression (or, you could argue, regression) of some of the ideas found in both glam rock and more anarchic late sixties/ early seventies acts like The Deviants or The Pink Fairies. And indeed garage rock.

So bands that exist between the cultural rifts of movements, offering the best parts of each, are often fascinating. Southampton's Nite People existed by the late sixties with their feet on either side of mod and progressive rock, and that makes them quite unique and also a really interesting (and, on occasion, quite thrilling) listen. At their best, they specialised in taking the kinds of ideas normally found on soul records and adding an incredibly fussy but somehow very forceful kind of rockism to them, and that's probably most apparent on the much-compiled and bloody good "P.M." The organ licks have that doomy, prog air to them and the guitar solo is dramatic, but it's undercut with a floor-friendly beat and the lyrical concerns of a pilled-up mod raver. Nite People weren't alone in this area - Shy Limbs (with Greg Lake) trod similar paths - but they're referenced less frequently due to the fact that they're missing a star connection. Both artists also bear vague similarities to The Charlatans, though I doubt they were direct inspirations…

"P.M." is widely available on all your usual download sites, and also on Youtube. The fact that it's commercially available puts it outside the remit of this site. However, the flip side "Season of the Rain" is an Elton John and Bernie Taupin composition which isn't available anywhere in this version, and is a genuine curiosity. They're surprisingly true to the Elton John style and vision throughout, though the thunderously heavy organ pounds away faithfully as usual, adding an extra slab of drama.

Nite People consisted of Patrick Bell on sax, Martin Clark on bass, Barry Curtis on keyboards, Christopher Ferguson and Francis Gordon on guitar, and Jimmy Warwick on vocals. This was their final single and their present whereabouts is not clear to me.

Season Of The Rain also turned up as the b-side to a cover version of the theme tune from The Banana Splits, credited to 'The Banana Bunch' - presumably The Nite People under a cunning alias.