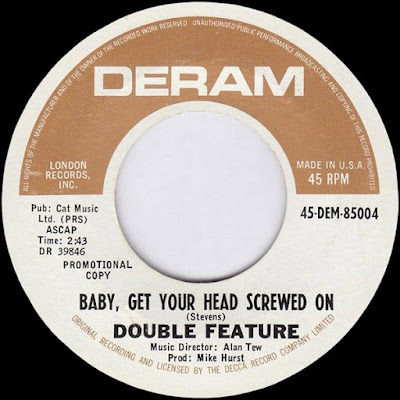 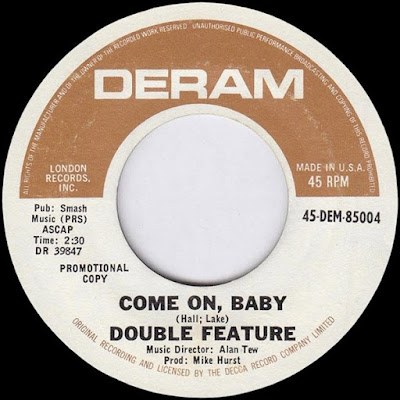 Whilst the Madchester/ Baggy revolution of the late eighties and early nineties is widely regarded to be the moment where psychedelia, guitar pop, soul and dance collided, in truth such dabbling around with the audio palette was occurring long before the Stone Roses and Happy Mondays.  There are tons of examples of singles released throughout the late sixties alone which tried to tick as many genre boxes as possible.

Cat Stevens's track "Baby Get Your Head Screwed On", for example, is given a particularly soulful psychedelic rendition here (or should that be psychedelic soulful rendition?) complete with parping horns, proto-Electric Light Orchestra styled string solos, and a gritty, gnashing vocal.  Whilst there's very little doubt that the track is actually quite ahead of its time, it falls just short of being brilliant by dint of the fact that the tune gets rather repetitive once they've set out their stall within the first minute.  There are very few fuzzy, psychedelic records of this era which will tempt you on to the dancefloor in a similar way, however, and for that reason alone it deserves the share of attention it has since had from aficionados.

The flip "Come On Baby" has an insistent groove which isn't dis-similar to The Equals, but again ploughs a similar furrow and fails to progress as much as it perhaps could do across its full two-and-a-half minutes.

Double Feature were a duo consisting of Bill Hall and Brian Lake who hailed from Birmingham, and following the failure of this and the follow-up "Handbags and Gladrags" to make a commercial impression they seemed to fade from view.  If anyone knows what happened after that or if they're up to anything now, please do pass the information on.

(This blog entry was originally uploaded in March 2011. Bill Hall's nephew and brother both got in touch to talk a bit about them - apparently Hall now owns a business and lives with his family, but he and Lake are now both a tiny bit embarrassed about their naiveté during their sixties pop heyday. I was left comments hinting at a "TV disaster" and sharing a mic with Hendrix, but nothing else. Come on, the pair of you, fess up. You've left two nifty records for everyone to remember you by. The version of "Handbags and Gladrags" - the first and best - was also covered here not long ago, and is a fine piece of work).

Very sadly both Brian Lake and Bill Hall have both passed away.

I'm really sorry to hear that, Fay. The two singles they released together are fine pieces of work and they will be remembered by many of us.