Reupload - John Bryant - A Million Miles Away/ It's Dark 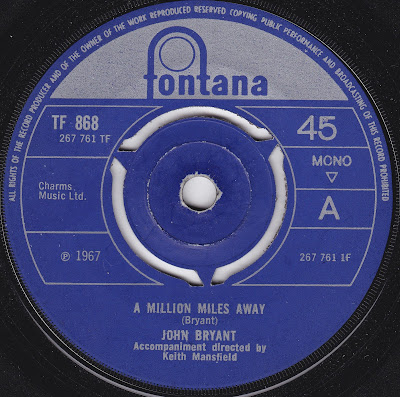 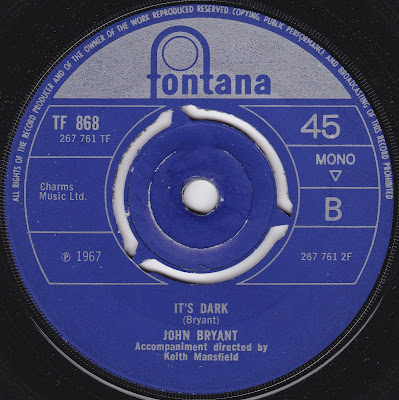 This, seemingly, is one of the rarest records in my collection. We've had these discussions before, of course - rare does not necessarily equal "valuable" or even collectible, so this in itself isn't a terribly impressive statement. On many occasions I have placed this single in the pile to go to the charity shop only to remove it and return it to the box from whence it came, purely because it's the only copy of it I've ever seen and to just brutally discard it in an unsentimental fashion runs against every instinct I have, however downright daft those instincts may be.

I have other sentimental reasons besides. This record was originally a joke gift to my father from a friend of his. Given that my Dad's name is John Bryant, he thought it would be highly amusing to ask why he'd hidden his talents for so long. The single became a family joke for a long time after that, with my Dad winding me up as a gullible five-year old by declaring to me, with apparent sincerity, that it was him singing. This felt astonishing to me. I loved records as much then as I do now, and the "fact" that my Dad had once released one made him almost superhuman in my eyes and I spun it on our chunky old record player (complete with sliding cabinet doors) on many occasions. Later being informed that I was, in fact, the victim of a cruel hoax was probably the first lesson in the long chain of life lessons we have to endure to eventually realise that our parents are not Godlike creatures after all - neither faultless nor all-knowing nor flop Fontana recording artists. Maybe the seeds of this blog were actually born the very day I was told the truth. Only a shrink could confirm that one.

Nonetheless, I rescued this record from a box of unwanted vinyl my parents were going to give to a charity shop in the nineties, and it's stayed in my collection ever since... and then I was slightly shocked to learn that a copy of it sold on ebay recently for £162. Apparently collectors of the Fontana label have huge trouble tracking this one down, and it's a sought-after release for that reason alone.

As for what it's actually like, back in September 2008 when I originally uploaded this record, I wrote the following:

"Even though I don't actually think this single is a masterpiece, it's the only release that's ever caused my entire family (rather than just me) to collectively puzzle and ponder about the whereabouts of the artist, and wonder if he possibly might be a distant relative. A quick google search and scour around some sixties sites reveals that John Bryant had three singles out on Fontana in the sixties, and one on MCA entitled "I Bring the Sun" which the "Happening 45" online store says is "Psychedelic pop manna from heaven, with mellotron, wah wah and tripped out daydream lyrics."

"A Million Miles Away", on the other hand, is most definitely not psychedelic. John Bryant sounds rather like one of the many folk singer-songwriters of the period who got rushed into major label studios to have an orchestra bunged behind their compositions, and I'll be frank, this really isn't anything much to flip your wig about. It's a perfectly pleasant three minutes, with his rich, deep voice musing upon the pleasures of solitude on the harbour, but anyone expecting a find on a par with Bill Fay is going to be sorely disappointed. The flip side "It's Dark" is rather more bouncy and perhaps more interesting, but there's not much in the contest."

John Bryant - now largely known as John D Bryant - came forward from the shadows and pointed me in the direction of his website, where more songs can be found as well as his other media projects. He seems to be something of an entertainment industry mover and shaker these days.

Anyone wanting to buy "A Million Miles Away" from me - and it is slightly scuffed due to my enthusiasm as a small child, as you can hear - you might have to wait. I'm not that interested in selling it yet, but I am about to embark on a very expensive house move, so who knows how I'll feel in the next few months…

Many thanks again for this very rare single !!

Question: Do you have this single from the UK band Syrup with "Gentleman Joe's Sidewalk Cafe" and "Love Is Here? (Amity records OTS 501)

I'm sorry to say I don't, Albert. If ever I come across a copy I'll let you know.

Thank you for your answer

I'd never thought of that, Frank, but you do have a point. I seem to remember that "It's Dark" was the track we played the most in my family household. We didn't bother with "A Million Miles Away" much.

I came back here because of your new post on John Bryant (May 10, 2017). Great story here. I enjoy the combination of your research and your personal take on the records you post.