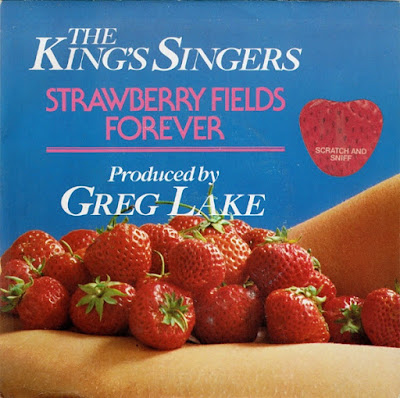 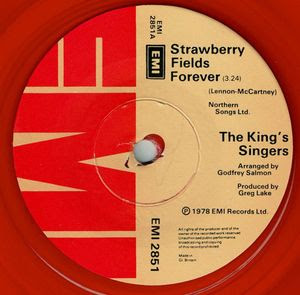 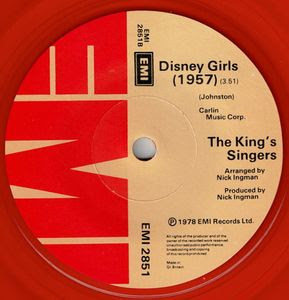 Sometimes I find myself wondering what on Earth I'm supposed to write about some of these records. Sometimes, instead of writing a big long description about the history of the act and what's on offer, I feel the urge to stick to the basics - so for this entry, all I'd really type is "This is the choral act The King's Singers covering the Beatles 'Strawberry Fields Forever' with The Beach Boys track 'Disney Girls' on the flip. Greg Lake produces". If I expanded on that, is there a danger I'd dampen the shock effect of the fact that the record even exists?

It most certainly does, however, and I'm probably as perplexed by it as you are. When the needle hit the grooves of this one on the first play, I must admit I was expecting a total dog's dinner of a record, another appalling Beatles cover to add to the long line of bastardised cash-in nonsense that's been released into the wild. In reality, it's neither as ridiculous as it sounds - and some of Lake's production frills actually help keep the proceedings mildly psychedelic - nor as unlikable as you'd expect. Also, as church choirs doing interpretations of modern classics has worked its way into the heart of popular culture in the early 21st Century, this probably sounds more run-of-the-mill now than it ever did in 1978. The King's Singers are obviously incredibly skilled at their craft and take the job in hand seriously, and the end production knows exactly where to draw the line in its interpretation, so there are no surprise fade-outs and fade-ins at the end, nor reverse effects. Overall, it's actually a pleasing record, like the long-forgotten sixties harmony act Tinkerbell's Fairydust taking a stab at the output of Mersey's finest sons. Oh, and the similarity of the intro to that of Bobak Jons Malone's "House of Many Windows" is, it's safe to say, coincidental.

Less excusable is the scratch and sniff sleeve containing a lady whose dignity is only covered with some strawberries. I'm sure such excesses played badly with the band's hardcore audience of Pebble Mill viewers and Christians, although who knows? The red vinyl EMI disc manages to make their disgusting seventies fawn and red label look halfway pleasing, mind.

The King's Singers were formed at King's College in Cambridge by six choral scholars in 1968, and are still active today and remain a successful live concern, performing 125 concerts a year. An adaptable approach to their set lists is one of the factors which has caused them to be a constant draw, including classical music as well as pop standards in their repertoire. After finding this one, my respect for them has actually increased tenfold.

(This blog entry was originally uploaded in October 2011. What I failed to mention at the time was that The King's Singers had also covered David Bowie's "Life On Mars" in an interesting fashion as well).