Iron Cross - Everybody Rock On/ All Of The Time 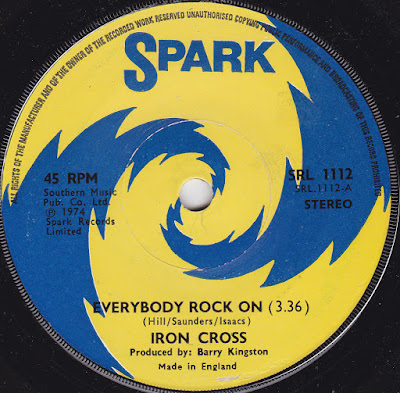 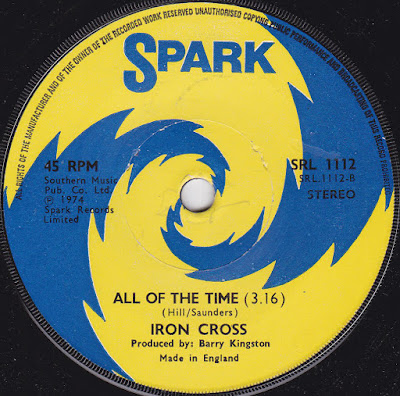 We've encountered Iron Cross once already on this blog, in the form of their gruff, masculine cover of "A Little Bit O' Soul". This, then, is their "other" flop single, and when this proved equally unsuccessful they disappeared never to pester the record racks again.

A shame, actually, because from the limited evidence we have they actually sound like one of the more interesting Glam Rock bands of the era. Producing self-penned material that sounded convincing and sharp, the A-side here "Everybody Rock On" is perhaps the most straight ahead piece of tinsel, consisting of the usual foot-stomping chants. Nonetheless, it's well constructed and could have been a hit under the right circumstances.

It's the flip - which is commercially available, unfortunately, meaning I can't upload it in full here - which fascinates me most, though. "All Of The Time" is a piece of angst-ridden seventies rock with a yearning quality which is almost haunting. This isn't heavy-handed stuff, and shows a group capable of writing intricate songs which went far beyond the usual thudding glam cliches. Taking traces of early ELO as well as hard rock and glam, if this was left to rot on a flip side, you have to wonder what else they had up their sleeves.

The band apparently hailed from Staffordshire and consisted of Dave Hill (not that Dave Hill, obviously), Alan Saunders, John Isaacs, Alan Wallbanks, Graham Collier and Mark Lovatt. More than that, I do not know - get in touch if you have any further details.