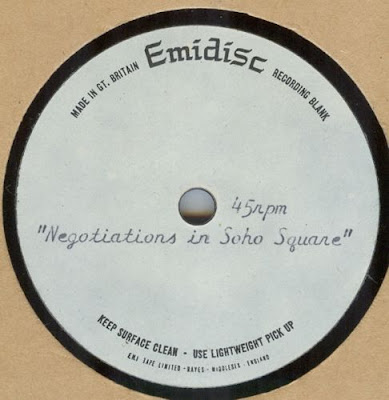 Label: [none]
Year of Release: Unknown

We all love a mystery acetate, don't we, readers? Certainly, few things brighten my day up as much as a previously unheard recording pressed on to metal lacquer, but as you'll all have worked out by now, I don't get out of the house much.

This one has really thrown me, though. So far as I know, the only release the song "Negotiations In Soho Square" has ever had has been The Tremeloes version, which is a bright, bouncy and sparkly piece of guitar pop. While they wrote the song, I'm quite confident this acetate has nothing to do with them - it takes the tune and turns it into a a piece of brass-ridden, swinging, sweaty basement soul, sounding more like the work of someone like Cliff Bennett or Georgie Fame than anyone else (note - I'm not actually trying to definitively claim that it is).

Someone out there must know who was responsible for this. In the meantime, we can all enjoy its driving, smoky basement sound.

Email ThisBlogThis!Share to TwitterShare to FacebookShare to Pinterest
Labels: ?, sixties, the tremeloes

sounds a bit like Steve Ellis, but maybe not quite a match

Apparently it's Tony Colton! There's a turn-up for the books.