Magic Bus - Cream and Bananas/ She Do Love Me 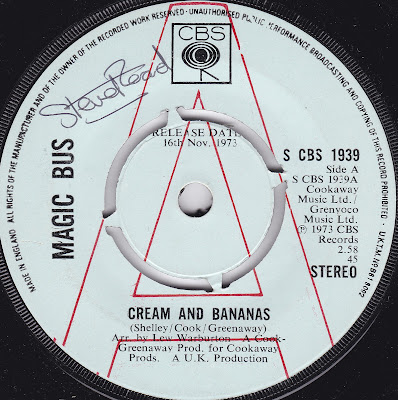 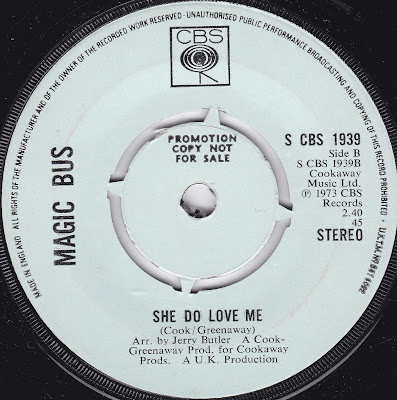 I've mentioned before that Cook and Greenaway were a songwriting force to be reckoned with in the sixties and seventies, writing a steady stream of hits for the likes of Cilla Black, The Hollies, Engelbert Humperdinck, Marmalade, and Cliff Richard. Much later on, Roger Greenaway would find fortune writing for commercial clients, penning jingles for British Gas and Allied Carpets.

Every successful songwriting career is littered with flops along the way, though, and "Cream and Bananas" here is one of the more bizarre leavings the pair dropped on the way to the bank. Squeaky lead vocals namedrop happening of-the-moment acts such as Sly and The Family Stone, and are backed with a jolly, trotting rhythm. It's the sound of a crew of children's puppets doing an impersonation of The Beach Boys while messed up on Hooch, suffering from a combination of drunkenness and a sugar high. Sales were, shall we say, disappointing, with the public clearly being unmoved by the noise.

The Martian Schoolgirls - Life In The 1980s/ Lonely Nights 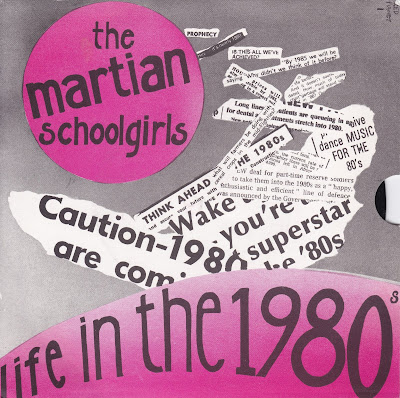 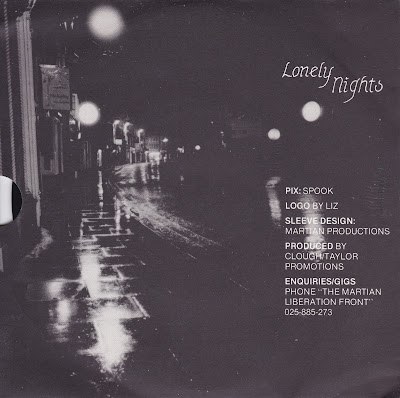 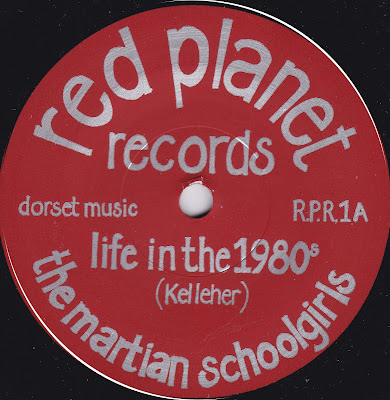 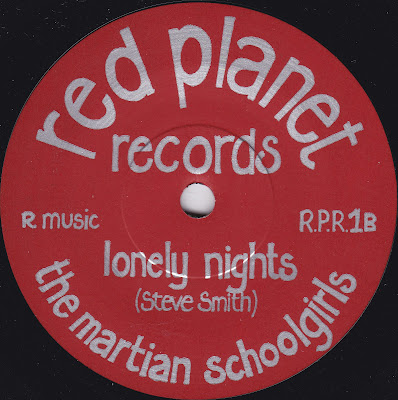 If you were an avid John Peel listener in the eighties, chances are you'll have heard him begin his first show of 1980 with this self-released dose of DIY punk. "Life In The 1980s" forecast a bleak, bored, dystopian near-future, with lots of lyrical references to "depression zones" and starvation.

While there's little doubt that the group were being slightly tongue-in-cheek, it was nonetheless not much of a New Year tonic - the late seventies had been a chaotic period for many in the UK, and there were those who thought worse was to come (and, depending on where they lived, they might not have been far wrong). "Life In The 1980s" was snappy and scrappy enough to punch the very worst possible scenarios across in its retro-futuristic lyrical style - you can almost imagine the ghost of Joe Meek giving an enthusiastic gold star to the group's sci-fi poetry.

The Martian Schoolgirls were a short-lived band formed by Dan Kelleher, who was originally bassist and backing vocalist alongside Joe Strummer in The 101'ers. When Joe sniffed a swift change in the zeitgeist and left to form The Clash, the band disintegrated and Kelleher initially moved on to The Derelicts, then finally this lot. While they were given some care and attention by Peel, and eventually picked up by Albion Records for one single in 1981 ("Motion") the group never quite rose above a fringe cult status.
Read more »
Posted by 23 Daves at 08:00 1 comment: 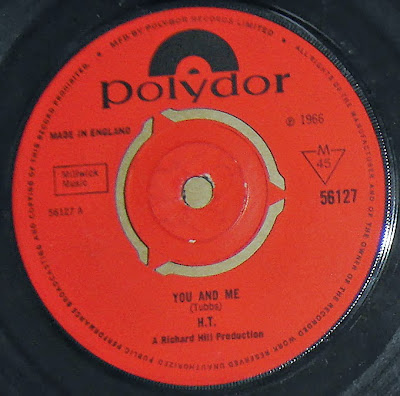 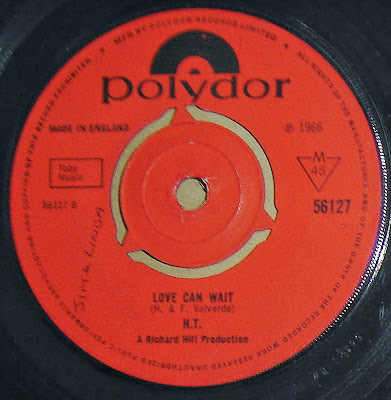 Minimal but strident and hard-hitting beat pop from Gibraltar of all places.

It's fair to say that bands from the British Overseas Territory of Gibraltar have not been widely chronicled in the great encyclopaedia of pop.  The island has in the past hosted major rock festivals and concerts, but its homegrown talent hasn't really made any significant impact globally.

H.T. were a group otherwise occasionally known as The Valverde Brothers (or is it the other way around?) who had a crack at pop success with this single.  The minimal nature of it is immediately striking without being particularly hard-hitting.  The verses consist of a simple pounding rhythm, the repetition of one finger-picked chord and something close to political protest singing.  "We're gonna plant an acorn, yeah… when it grows in eighty years, remind them of you and me!" they holler, then eventually the chorus gains a tiny bit of traction only for the song to quickly slide straight back into minimalism again, the verses acting as peculiar strips of emptiness between the main action.  It's structurally bizarre, but not threatening or snotty enough to be classified as garage or mod, far too meaty and beaty to be psychedelic, and despite its best intentions the jolliness of the vocals makes it seem like some peculiar hybrid of "I'd Like To Teach The World To Sing" and The Eyes.  I like it for being so strange within the confines of quite a bubblegum performance, but I suspect it might be an acquired taste.
Read more »
Posted by 23 Daves at 08:00 1 comment:

Links to this post
Email ThisBlogThis!Share to TwitterShare to FacebookShare to Pinterest
Labels: H.T., sixties, The Valverde Brothers 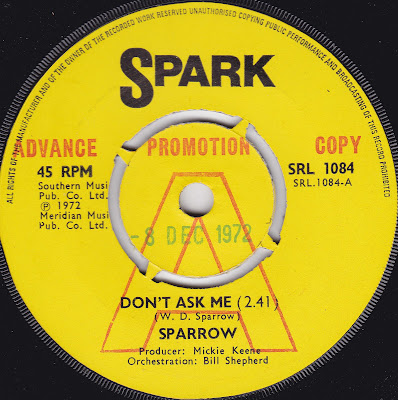 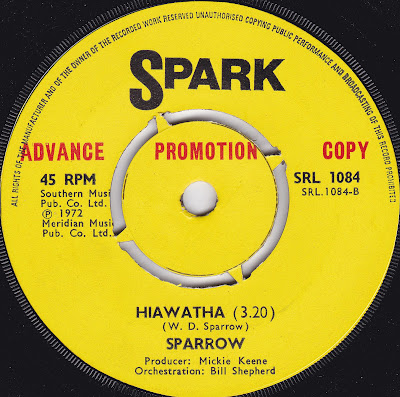 When people think of Elaine Page, it's likely to be her successful showtunes and theatrical appearances that spring to mind, not her appearances on popsike obscurity compilations. Nonetheless, her work as a pivotal member of Sparrow in the seventies did find its way on to Volume Six of "Circus Days", and their LP "Hatching Out" has found itself becoming a moderately sought-after item (zero points for the title or the sleeve though, Spark).

Sparrow consisted of a wide array of performers and musicians besides Page, and their LP is an odd pot pourri of rock, folk, faintly retro pop and MOR harmony pop. As such, "Don't Ask Me" is about as representative a release from it as any. Beginning with a "Be My Baby" inspired beat and continuing with an unashamedly Spector-ish production, it feels as if it could have been released in the previous decade, in common with a lot of Sparrow's work. Despite that, it never truly soars (and no, that wasn't my attempt at any kind of bird-related pun).
Read more »
Posted by 23 Daves at 08:00 No comments: 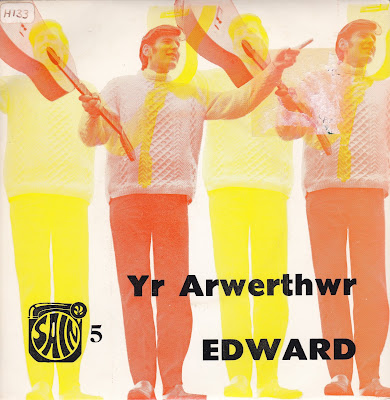 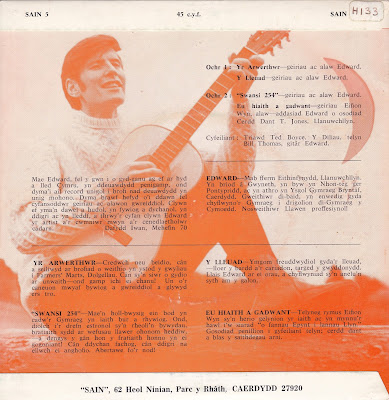 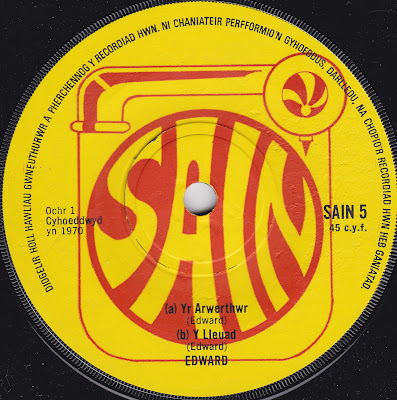 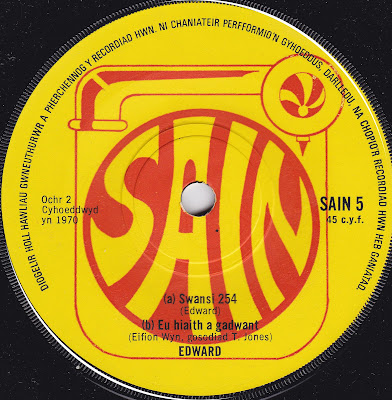 Welsh folk with a glint in its eye

Well, here's a thing. Sain is a rather collectible and sought-after indie label, and has found its tracks compiled by many keen students of vinyl esoterica. Edward, though - or Edward M Jones to give him his full title - has always been strangely absent from modern Welsh language tracklistings everywhere.

That's perhaps understandable in one sense, as the music he created was frequently jaunty rather than deep and maudlin, and had a spring in its step without being particularly psychedelic or hippified. You could call his work a bit "square", even. Yet at the time, Edward was actually quite a significant figure in Welsh music, actually releasing a joint EP with the sixties Welsh superstar Mary Hopkin, with the pair even holding hands on the sleeve. Perhaps even more importantly than that, depending on your point of view, he also recorded children's Welsh language albums with Dafydd Iwan, then the president of Plaid Cymru.

So far as I can discern from the sleeve here,  he was - and presumably still is - also a Welsh nationalist and keen promoter of the Welsh language, which was also a large part of his dayjob with his young pupils as a teacher at Yshgol Cymraeg Bryntaf school in Cardiff. 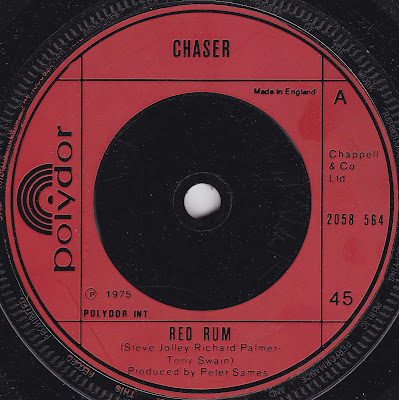 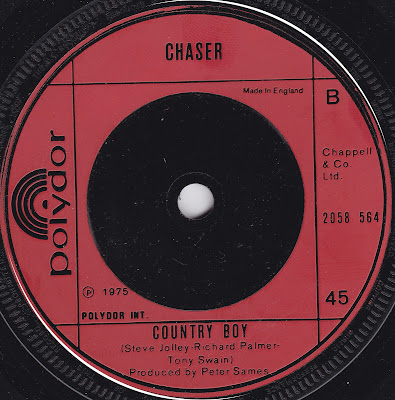 A glam rock song about a lovely horse. And it's rather good.

Red Rum was everyone's favourite horse in the seventies. The three-times Grand National winner was given endless excitable press, and ended up with his bemused horsey face on cash-in T-shirts, mugs, posters and probably belt buckles for all I know.

While faintly glam rock tinged songs about racehorses might therefore seem strange from the perspective of the average person living in 2018, in Red Rum's case, it's understandable. You could argue that anyone trying to produce a stomping glam number about him was actually living up to the standards and expectations of their time - a squeaking analogue synth, a glitter beat and a tune about an equine champion was, really, none-more-mid-seventies.

The studio group Chaser also do a solid job of bigging up the champion horse, with buzzing, squeaking guitars, galloping rhythms, and a soaring chorus. Lyrically too, they appear to both celebrate and feel some sympathy for Red Rum, asking "Is that a tear in your eye?" and speculating that he might want to feel "free" - which is both an odd and interesting question for a single of this nature to ask. "There's a bottle of wine at the end of the line" they try to reassure him, which is even more peculiar for reasons I don't need to underline. 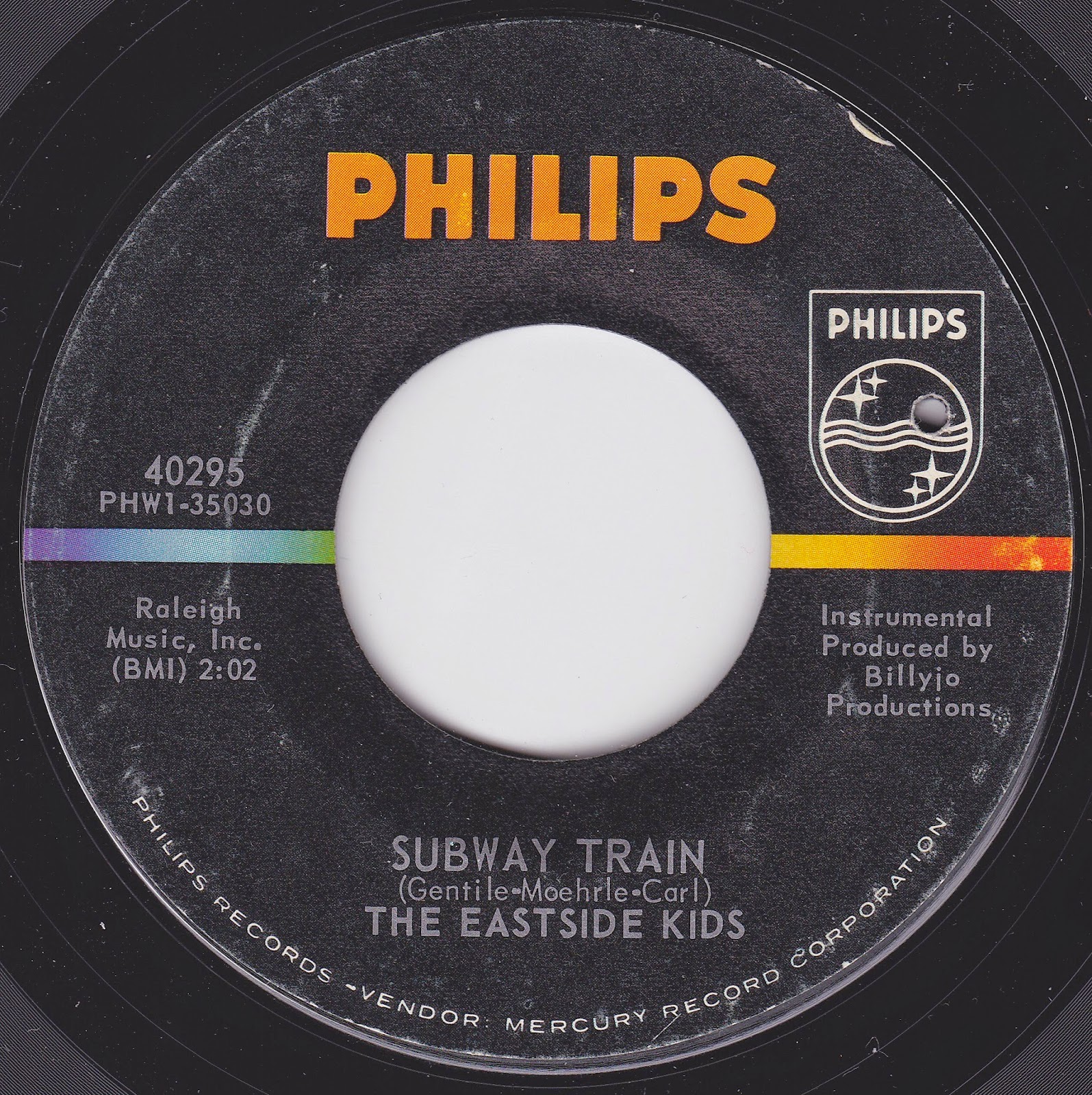 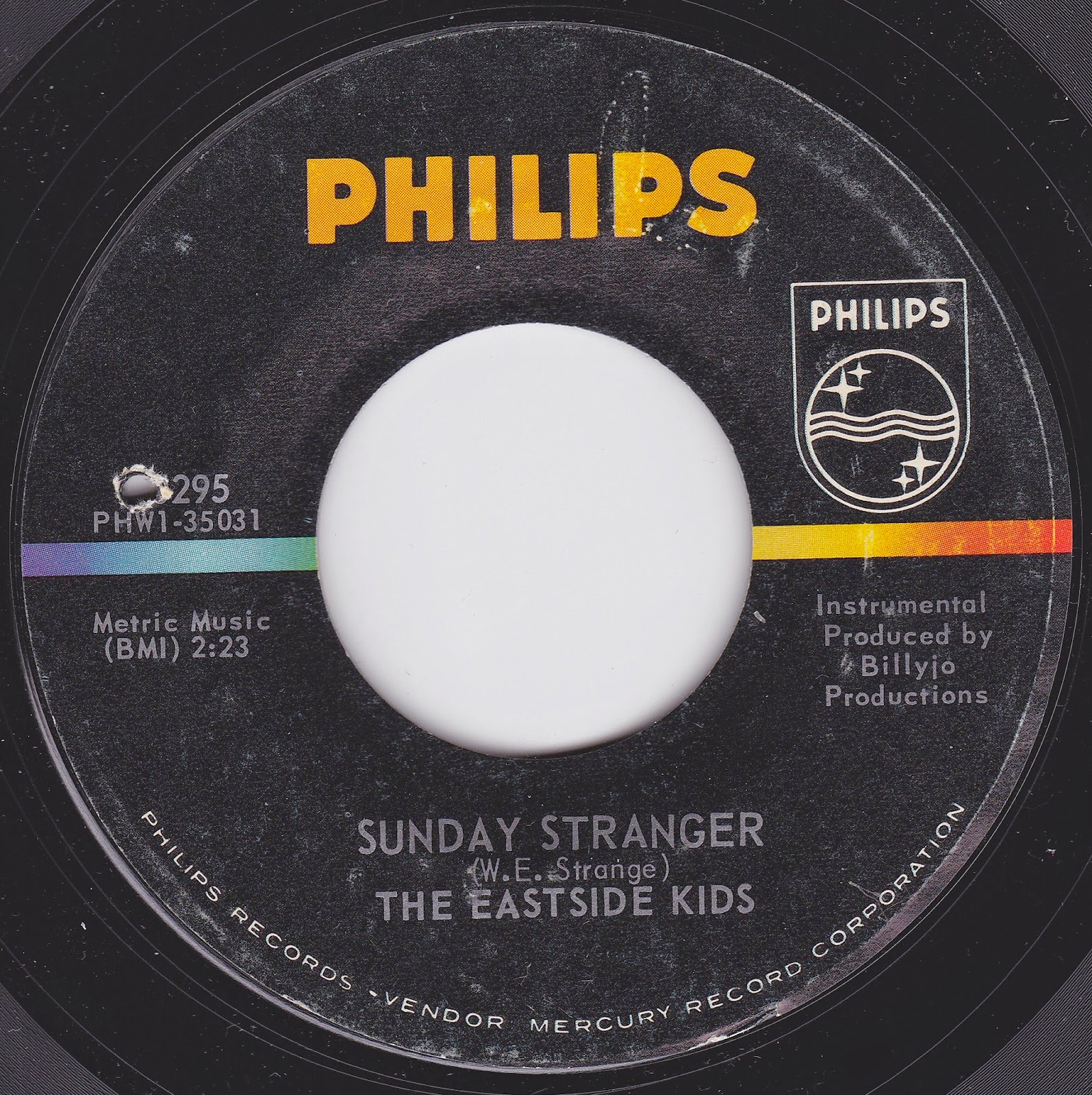 It's always faintly frustrating when I locate a single I really like, but the artist(s) behind it seem so elusive that I'm unable to offer you good people any kind of background whatsoever. In this case, this bunch of Eastside [one word] Kids seem to have no relation to the other Los Angeles based East Side [two words] Kids who arrived later in the sixties and issued several singles, although there seems to be some dispute online about that fact.

Billy Carl co-authored the A-side "Subway Train" and there's evidence to suggest that this is Billy Carlucci who eventually served in the 1910 Fruitgum Company. It seems probable that he was a member of this very short-lived outfit too. The author W.E. Strange may also be the guitarist Billy Strange the session musician. As for the rest? No idea. No data. If you know, please pass your knowledge on.
Read more »
Posted by 23 Daves at 08:00 1 comment:

Port Authority - When The Love Was Given Out/ Say It Again 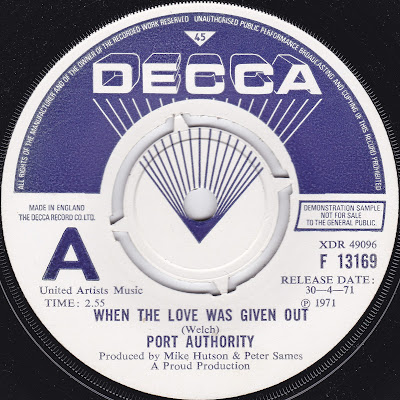 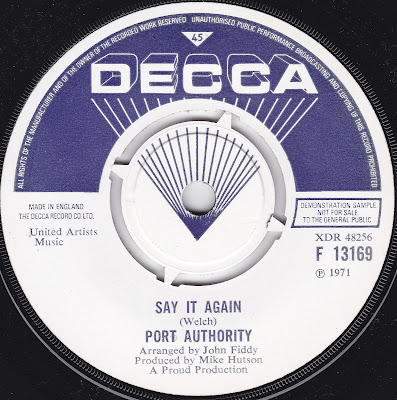 If you're anything like me, which if you're reading this already I suspect you are, you'll often browse ebay's auctions for promising sounding obscurities. While doing so, you'll occasionally notice that the final auction prices for some records you've never heard of slowly creeps up over the months and years, to the extent that you begin to wonder what might be going on. All this excitement and cash-flashing can't be the result of nothing, surely?

"When The Love Was Given Out" is a big case in point for me. My curiosity was tweaked by a chance recommendation of this record by someone, and by auctions referring to it as a "fuzz guitar dancer!!!" which seemed to pump the price up. Chancing upon a copy for a tenner on Discogs recently, I decided to take a gamble. And well...
Read more »
Posted by 23 Daves at 08:00 4 comments: