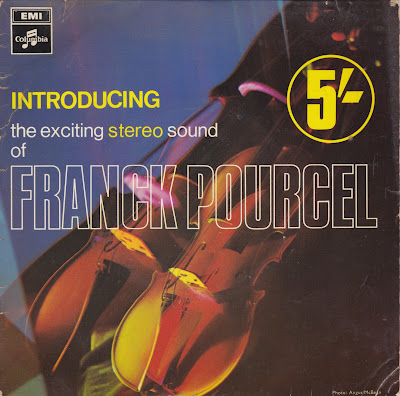 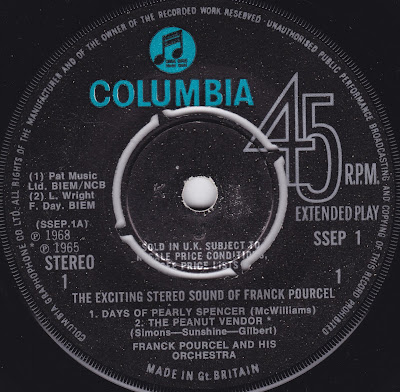 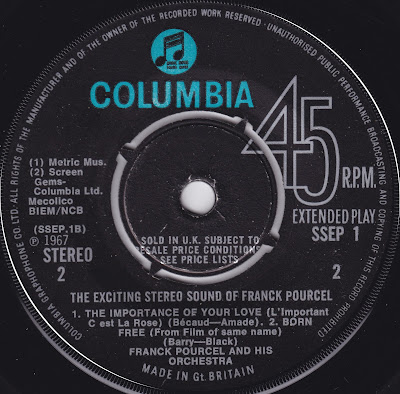 This EP has been causing a bit of fuss online of late, primarily for featuring one of the most unexpectedly strange cover versions in Easy Listening land. That track, the squealing, oscillating, analogue synth infested cover of "Days of Pearly Spencer", is indeed an exciting stereo sound - like something you would hear at a firework party while drunk on scrumpy and high on LSD simultaneously, or the sort of noise Number 6 might have heard at a cocktail party in "The Prisoner" at which he was injected with something that made him a bit woozy. This, folks, shows just how weird even the most middle-of-the-road offerings could be in the late sixties.

While "Pearly Spencer" here is clearly intended to demonstrate the wonders of music heard through a good stereo system, with its ambitious arrangement and hi-tech (for the time) instrumentation, the rest of this EP is comparatively run-of-the-mill in terms of its ambition. Pourcel's attention to detail with the arrangements is wonderful, but they won't slap you in the face with quite the same force as the first track.


Pourcel's music career began in France in 1931 and he recorded his first LP in 1954, going on to enjoy easy listening hits all over the world, as well as acting as the conductor for France at the Eurovision Song Contest on all but two occasions between 1956-1972. He also composed the official anthem for the Concorde at the request of Air France.

By the time he died in November 2000, he had recorded 250 albums and 3,000 songs. That's quite a career, and one which would take even the keenest vinyl digger a long time to dissect.

Nice find, as usual. Based on some notes I have, another of Pourcel's claims to fame is that he co-composed the hit song "I Will Follow Him" using the name J W Stole, along with Paul Mauriat (writing as Del Roma), Jacques Plante (not the NHL goalie), Norman Gimbel, and on some recordings Arthur Altman.

Congrats on finding this. Great music from 50 years ago! This version comes across as a bit chunky compared to the one by his one time pianist Raymond Lefevre. In my opinion Lefevre's version is much better with its swirling string arrangement.