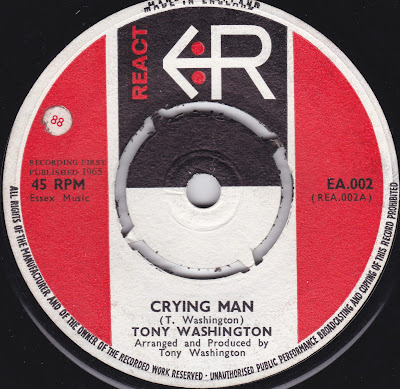 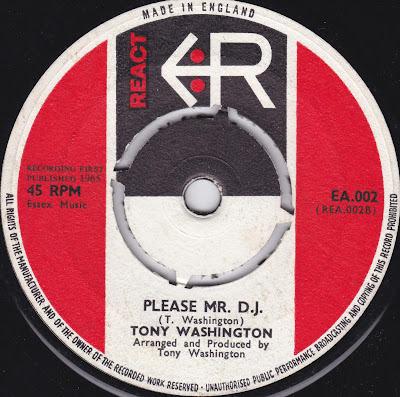 Island ska songwriter with a neat piece of mid-tempo soul

The name Tony Washington may not seem immediately familiar, but he is believed to have played piano on the historic, ground-breaking recording of "My Boy Lollipop" by Millie, and also wrote the single's B-side "Something's Gotta Be Done".  Arriving from Jamaica in the early sixties, he found an early champion in Chris Blackwell who, besides the Millie gig, cut some of his own singles on Island and also the label's Black Swan and Sue subsidiaries.

Unfortunately, unlike Millie his solo ska material never really came close to breaking into the mainstream, and most of his singles are incredibly scarce these days. He attempted some non-ska releases too, such as the track "Sunday" in 1963 which was aimed more at the pop market, but even these went nowhere.

Given the fact that "Crying Man" found its home on the tiny independent label React, it's arguably one of his more obscure and poor-selling efforts. Like "Sunday", though, it falls back on a conventional structure, this time a jogging soul sound. You could almost describe it as a Northern Soul sound, but it arguably lacks the tempo or the emotional delivery; Washington's vocals in places sound oddly cheery given the rather glum break-up the lyrics portray. Nonetheless, it's a solid performance and a highly likeable record.


Nestling on the flipside is "Please Mr DJ", which sounds a bit more throwaway, more of a jokey message to DJs the pluggers at React (assuming they had any) might be dealing with.

Washington's recording career seemed to continue right up until 1980 before he called it a day, and his place in British reggae and ska history for his work with Millie should not be understated.