Ranee and Raj - Feel Like A Clown/ Rainbow Land 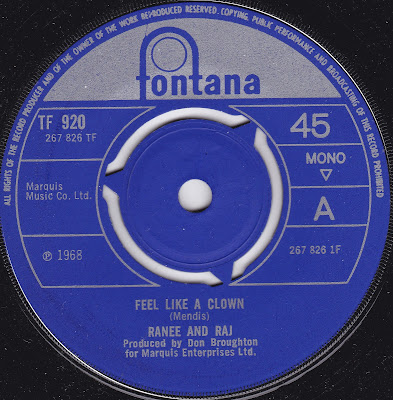 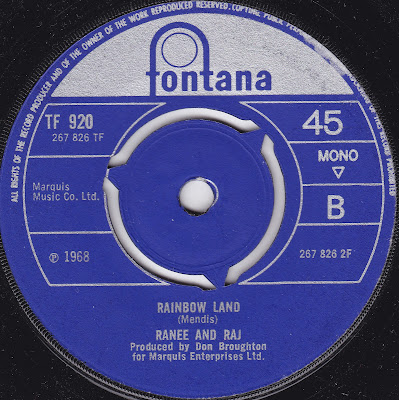 Sweet boy-girl pop with an Eastern and faintly psychedelic tinge

Sri Lankan pop stars are still a relatively rare deal in the UK, and these two were the first to have any mainstream media exposure here. Nimal Mendis and Sandra Edema both had a solid background in their native country, with Sandra having managed a Sri Lankan hit single at the humble age of twelve ("Oh My Lover") and Mendis authoring the soundtracks to a number of Sri Lankan films.

Mendis's first big break in England was placing the song "Kiss Kiss Kiss" with the singer Mary Marshall in 1958. Notable for being imaginatively engineered by Joe Meek with heavy use of echo and a decidedly forward-thinking sound, the track unfortunately failed to sell, but opened other doors for Mendis in the UK, including songwriting for the British folk group "One Two and Three" in 1965.

A few years after this unlikely dalliance with British folk music, Mendis and Edema teamed up to release a couple of singles, this being closely followed by "Don't Tell Me I Must Go". At the time, this 45 was widely predicted to be a smash, with the pair being given a slot on "Top of the Pops" to promote it, and promising amounts of airplay. In the end, it sold in disappointing quantities and is quite hard to track down today. Perhaps that's due to the fact that "Feel Like A Clown" is one of those truly frustrating records which feels as if it's building towards an astonishing chorus - Edema's vocals are yearning and truly beautiful towards the end of each verse - only to settle into something hooky but somewhat pedestrian by comparison.


In the USA, the sides were switched and "Rainbow Land" was the plug side, which didn't pay any greater dividends but makes some sense. That track is where the pair go popsike bananas, with a light, fluffy and very commercial arrangement guiding their strong vocal harmonies. It's certainly more commercial, but hides Sandra's considerable vocal skills in the background and manages to sound very similar to a lot of other material around throughout this period.

While the pair may have failed to break big in the west, Mendis continued to be a prolific film scorer and songwriter, and Sandra Edema remained a known figure in Sri Lanka. Sadly, however, Mendis passed away in 2015.

Interesting songs although they just don't quite cut it. B-side I think is a bit stronger.