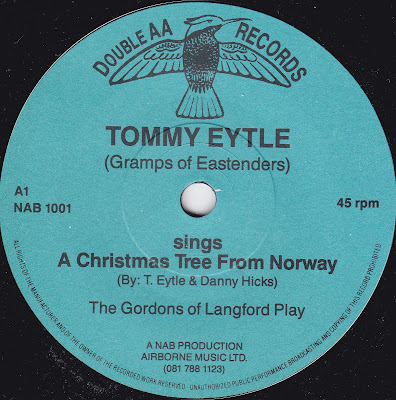 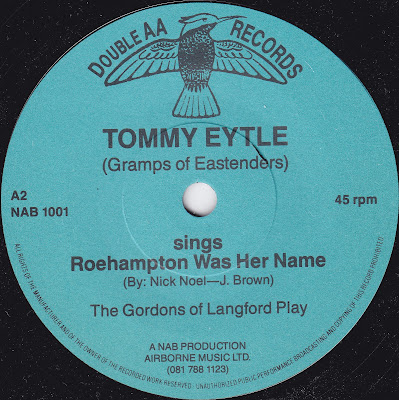 Here's an odd 45 which presumably has some kind of back-story, but one that doesn't seem to be documented anywhere. In fact, the record label doesn't even offer the year of release.

Tommy Eytle is probably best-known for playing the role of Gramps off Eastenders, which he held from 1990-1997. He was introduced as part of the Tavernier family, who were parachuted into the soap to balance the diversity of the cast (prior to that point, the cast of "Eastenders" didn't even come close to representing the mix of cultures in the East End, and indeed it could be argued the series still doesn't. We'll save the debates about mainstream soaps holding an accurate mirror up to their local worlds for another time.)

Prior to this major acting role, however, Eytle was also a respected jazz guitarist and calypso singer who gigged at numerous clubs up and down the country, as well as performing the "Narrative Calypso" in the film "The Tommy Steele Story" in 1957.

His "Eastenders" role also occasionally afforded him the chance to have a good old-fashioned singalong in The Queen Vic, and perhaps that's why this single emerged. Or there was possibly another reason - the "Gordons of Langford Play" credit at the bottom of the label seems to point towards an acting job in either a local community or fringe theatre production.


Equally odd is the logo of the record label and the "Airborne Music" credit at the bottom. Airborne  used to be an sixties independent label who had virtually the same design while they were active, predominantly putting out pop, novelty and Caribbean releases. They seemed to drop off the map in 1966, only to be revived in 1974 solely for a Newcastle World Cup Squad record, and then again in the nineties purely for this. Mysteries pile upon mysteries.

None of which leaves us having discussed the songs themselves, which actually just consist of Eytle crooning rather warmly and sweetly, and are not really reggae tracks at all (as I'd hoped they would be). Side A works purely because he's exactly the sort of character you would want to drop into your living room to sing you a tune on Christmas Day, side B is a little bit cheap and throwaway by comparison.

Sadly, Tommy Eytle died of a heart-attack in 2007. By that point, he had not appeared on Eastenders for nearly ten years, so his character was given no real send-off, but perhaps this Christmas we can all raise a little glass of brandy to the man.

The 081 prefix of the London phone number on the label dates this somewhere between May 1990 and April 1995 - not that great a help but it's something, I suppose.

I might venture the speculation that these tracks were arranged by Gordon Langford but sadly we can't ask him as he died in 2017.