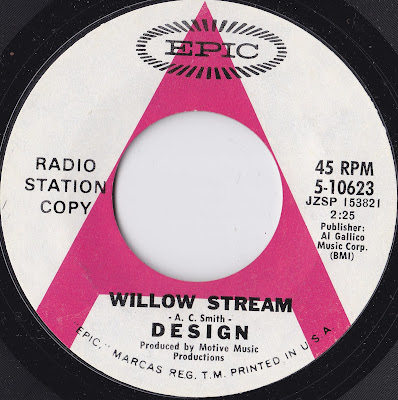 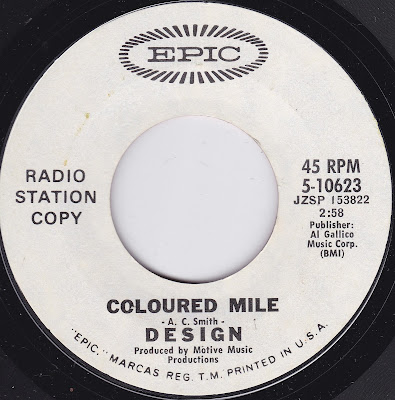 Design were a harmony pop outfit who issued a number of singles in the seventies to fairly limited success. The corridors and dressing rooms of light entertainment were filled to the brim with smiling boys and girls teaching the world to sing in those days, so the music business's perseverance was understandable, but it does have to be admitted that their later releases can only be described as 'well performed but typical of that fare'.

Their debut single "Willow Stream" has just enough popsike in its sound to appeal to collectors, though. If you're one of those people who looked at a rare copy of Tinkerbell's Fairydust's LP and actually considered buying it, you'll probably be happy to pick this up for the spare change in your pocket as well. It has a seventies pop bounce which definitely dates it stylistically outside the sixties, but the lyrics and harmonies still have one foot in the previous era. The B-side isn't bad either.

For unknown reasons, copies of this seem slightly easier to obtain in their US demo pressing, which clearly indicates some heavy optimism on behalf of Epic. Oddly, they later went on to promote "Coloured Mile" to the A-side of their next release, but that didn't perform any better.


The group consisted of Tony Smith, Geoffrey Ramseyer, and Barry Johnston on guitar, John Mulcahy-Morgan on drums, and Gabrielle Field and Kathy Manuell on vocals (who apparently both received operatic training according to CBS's press release). In the UK, they had a total of thirteen singles out before calling it a day, which proves that if you had a light, family-friendly commercial sound in the seventies, you'd probably be given a longer run in the biz than a flop rock band. Still, as these sides amply demonstrate, Design were both able songwriters and accomplished performers.

Design are a relatively recent discovery of mine (probably last year), they sound so perfectly early 70s light entertainment it hurts. A bit Association, a bit New Seekers. Apparently they appeared regularly as musical guests on BBC TV shows, though good luck digging through the BBC Genome website looking for them. Probably one of the few acts to cover "Man we was lonely" from Macca's debut album. I also think "Coloured mile" was a better A-side than "Willow stream".

Design were the go-to act for harmony pop on all manner of LE/comedy shows in the 1970s, and I think the most accomplished and enjoyable. Many of their performances can be found on DVDs - on The Wheeltappers & Shunters Social Club (series 2 & 3), The Benny Hill Show (1974), The Tommy Cooper Hour, The Two Ronnies (series 3), Sez Les (volume 2) and The Morecambe & Wise Show (series 5, 6 & 7).

Thanks for the added info, Billy and Rob. I knew they appeared on a number of 70s light entertainment shows but had no record of which. It certainly explains their career longevity.