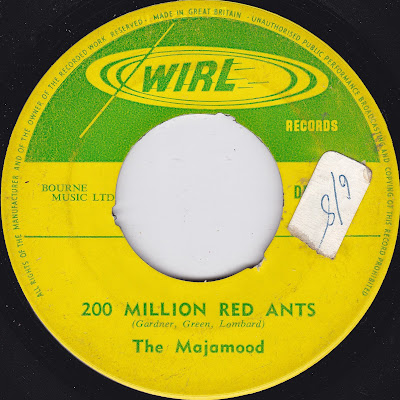 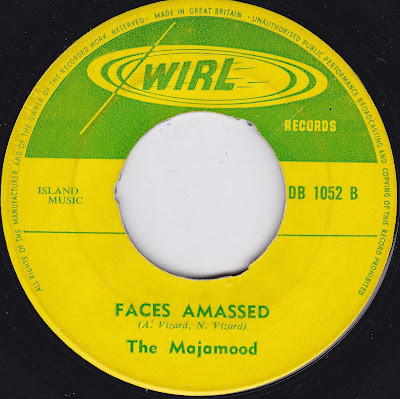 All record collectors come across vinyl that bothers them in the wee small hours of the morning, not just with the questions "Who did this?" but "Who enabled them?" The music business may be many things, but it's seldom generous with its money - it knows its markets, and few releases are ever done as favours or frivolous gestures. Everyone, from the band to the record label owner, usually expects some kind of dividend to emerge from a release, whether it's an increase in credibility or proper sales.

On those standard levels, then, this release makes no sense at all. The WIRL label, which stands for West Indies Records Limited, dealt in the kind of regional fare you'd expect. Anyone anticipating a reggae or ska release in this instance, however, would be surprised by what they hear when the needle hits the grooves - this is fuzz guitar infested folk with the kind of production values you'd expect from a group recording in a community hall after-hours.

The A-side "200 Million Red Ants" worked its way on to the "Circus Days" series of compilations, which is how I first became aware of it. It's a doomy, sombre meditation on the rise of communism in China and how a serious watch needed to be kept on such things - well, it's either that or a literal protest song about red ants on the lawn (my garden got colonised by the little bastards last year, and let me tell you, they do destroy the lawn. It also counts as the only time I've ever had this single as an earworm). The flip is yet more of the same, leaving you with the impression that the group had an obsessive focus on this particular topic.


It seems obvious to me that there must have been a back-story here, but I'm damned if I know what it is. Was this single put out as a fund-raising effort with WIRL offering their help as fellow fighters against the Communist threat? Were the group just a bunch of amateur folkies who wanted to put a record out, and were chummy enough with WIRL that they obliged? Or were WIRL just trying to diversify into the equally niche folk market and this was their one failed attempt at doing so?

I have absolutely no answers, but it won't hurt to put the questions out there one more time. If anyone knows the story behind this disc, please do leave a comment and put me out of my misery.

Email ThisBlogThis!Share to TwitterShare to FacebookShare to Pinterest
Labels: folk, sixties, The Majamood

Really, really fuckin' excellent 45. BOTH sides are cool, especially "Ants". One of the top 5 from this blog, all-time.

These are my Dad and his brothers ‘the Vizard’s’ songs, the A side features Manuela Gardner. My Dad and his Bros formed a group in the 60s. Shame they didn’t push to get out there more. I’m biased but I really do think they’re good. My dad is far from a communist but he does like to be controversial so I can imagine that was perhaps the intention. They have more songs too but I’m not sure if they were ever released. It would be amazing to own a vinyl copy of this.

The A-side is very very good - such a doomy piece of music, quite addictive. Even the low quality production seems somehow fitting, can't really imagine it as a polished studio product. Love it, thank you so much for posting it!