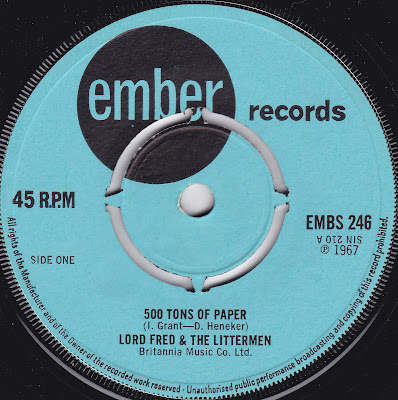 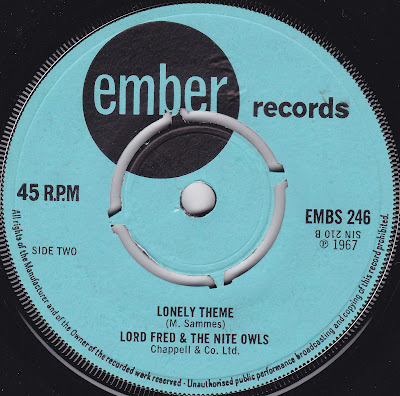 I've got a certain amount of affection in my heart for Ember Records, while not necessarily being a wild fan of all their output. Plucky independent labels weren't just uncommon in the sixties, they were also often doomed to failure - so Ember's moderate successes are heartwarming and reassure me that even in the most unsympathetic business environment, the cottage industry can find a way to succeed.

Between the minor hits (and Glen Campbell's big ones) lay quite a few oddments and flops, though, many of which have since been compiled on to rarities CDs. This one, for example, has remained untouched and mysteriously unclaimed. It's not clear who Lord Fred and The Littermen were, though the contents are pure music hall jaunt and the lyrics seem to point towards a "Keep Britain Tidy" campaign. (I've some sympathy with the theme, in fact - somebody needs to drive around the streets of Ilford playing this through a deafening loud hailer until people stop trashing the area).

The flipside seems to be the work of Mike Sammes Singers, so perhaps he was involved with the A-side too. Whatever, this is another example of a novelty single that didn't quite strike home, proving once again that trying to score a hit based on little more than a cheery, vaguely comedic lyrical theme and a catchy tune is a huge risk.

If anyone knows the full context for this single, please do let me know.