Slimy & The Gibbons - The Banana Song/ RSM One Day 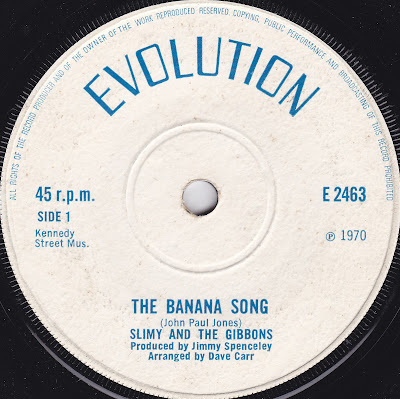 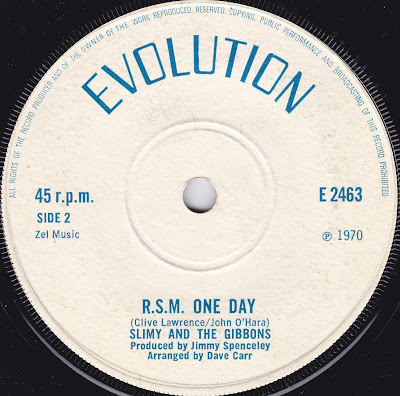 The "British Lenny Bruce" on a strangely Goodies styled tip

While he's seldom discussed these days, John Paul Jones, aka John Paul Joans, aka John Davidge, was a peculiar outlier in the British comedy scene who pointed possible ways forward. While most working men's clubs booked acts who were either fast-popping gag machines or specialists in blue material, Jones strode about the stage defiantly talking about banning the bomb and sexual deviancy - seriously way-out fare for the early seventies.

We've already dissected both his career and its tragic end in enormous detail here,  as well as mentioning his peculiar recording career which turned out several strange releases. This is another one, under another bloody pseudonym, and is probably the most off-brand effort of all. It's possible to hear some psychedelic hippy-dippy whackiness in these grooves, but ultimately it's a childish piece of cartoonish oom-pah quirk about the joys of bananas. Novelty psychedelic pop? Possibly, but if so, it landed at least three years too late.

The flipside is a baffling army tune which seems as if it must have a satirical point, but none becomes immediately apparent.


Perhaps fortunately for Jones, this wasn't even close to being a hit and he was able to maintain his career as a cutting-edge comedian. Given that it was this very credibility which enabled him to carry on right to the point where it nearly killed him, though, a hit single with some common-or-garden whackiness might have changed his direction slightly. Somewhere in a parallel universe, perhaps he hosted Children's ITV in the eighties with Scally the crap talking dog, and has a comfortable retirement fund. In this reality, however, he apparently remains in rather poor health, which is a terrible shame - I really hope something can be done soon for someone who was a serious grafter and innovator on the comedy circuit.