Reupload - Bill Kenwright - Tiggy/ The House That Fell On Its Face 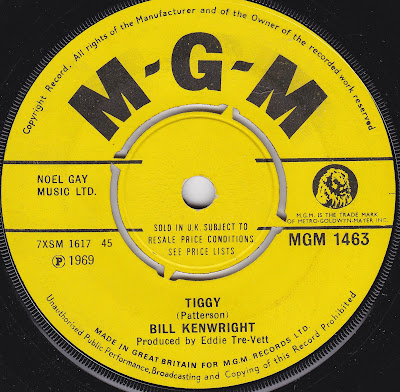 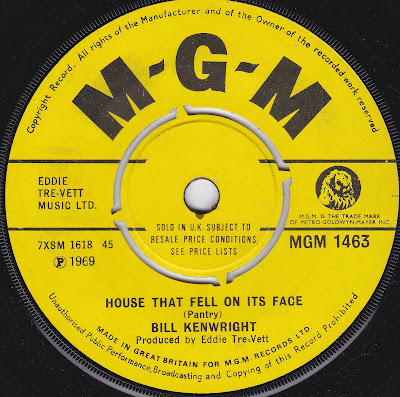 Bill Kenwright CBE is a man who has beavered away for many decades in entertainment, a name as likely to pop up in the background as well as the foreground of popular culture. During the late sixties just before this single was issued, he was busy playing the Coronation Street character Gordon Clegg, who ended up being woven in and out of the soap's plots over the next few years whenever the man's availability would allow. Prior to that - and perhaps unbeknownst to many viewers - he had a moderately successful singing career in the clubs and a number of singles were issued.

To say "Tiggy" is an unexpectedly epic example of his work would be an understatement. It starts with an urgent morse code riff, flows neatly into an urgent sounding verse then an epic, steamrollering chorus - like "Eloise", the track tries to slap you into submission, with all the fire alarms activating and water jetting down from the emergency sprinkler system. Whoever "Tiggy" was, Kenwright was manically keen to get her attention, though I'd personally have been a little afraid; but nobody can deny the overpowering first impression the track makes. It's a testament to producer Eddie Tre-Vett's usual skills in creating a powerful yet considered racket when needed, and it's somewhat surprising this didn't manage to at least become a minor hit.

The B-side "The House That Fell On Its Face" is also of interest to aficionados of popsike, being penned by producer Eddie Tre-Vett's boy wonder John Pantry. In total contrast to the A-side, it's one of Pantry's delicate, mournful pieces about a disintegrated relationship, closer to "Glasshouse Green Splinter Red" than anything by The Factory. Kenwright appears to be doing an impersonation of Pantry's vocal style throughout, suggesting that it may have been quickly recorded after hearing a rough demo.


Kenwright is yet another one of the lucky sods on "Left and to the Back" whose career we really don't have to examine too closely in terms of what might have been. He became a producer of many successful West End musicals (notably "Blood Brothers" and "Scrooge - The Musical" as well as the "Joseph and his Technicolour Dreamcoat" tour) and is the present Chair of Everton football club. Besides that, he runs his own record label (Kenwright Records), and is married to actress Jenny Seagrove. Having achieved more in one lifetime than most people could deem possible, I doubt he's much bothered about "Tiggy" failing to chart in 1969.