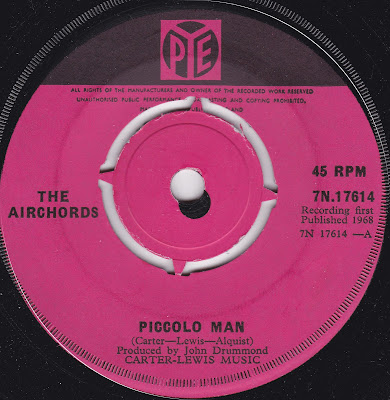 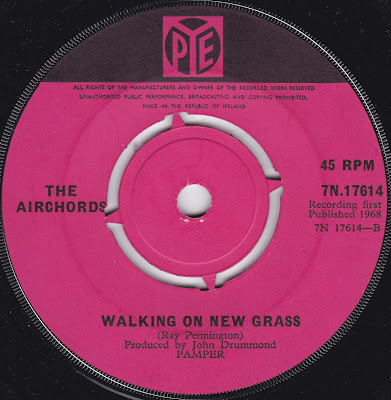 The Irish Showband circuit was an unusual, occasionally makeshift phenomenon where rock, pop, soul and sentimental balladry co-existed in a prefab cabaret world. The excellent BBC documentary "How Ireland Learned to Party" gave context to the chaos, telling tales of bands hauling themselves up and down Ireland's A roads to makeshift rural venues and concert halls alike.

The showband circuit seldom harboured rebellious acts, but The Airchords probably still seemed like the least rock and roll of the lot, initially consisting entirely of members of the Irish Air Corps, and undertaking their initial rehearsals in a military dining block room. Forget about Elvis Presley bring forced into military service - The Airchords were the military, finely drilled, clean-cut and obedient, and barely a trace of long hair in sight.

Despite this - or perhaps partly because of it - they were briefly top pop stars in Eire, having large hits  with "The Leaving Of Liverpool" and "The Irish Soldier", and a 1967 number one with "Treat Me Daughter Kindly". "Piccolo Man", on the other hand, peaked at a slightly more tentative number 16 on the Irish Charts, seeming not to grab the public's imagination as much as their previous bursts of sentimental bravado.

At the bare minimum, though, the song managed better in Ireland than elsewhere. The track, partly penned by in-demand songwriters John Carter and Ken Lewis, never really took off in the UK or mainland Europe despite its populist "Puppet On A String" styled oompah bounce. The Airchords clearly tackle it with straight-ahead efficiency and vigour - even if the intro does at one point sound like the old TV ident to Scottish Television - but it possibly didn't give the Irish public enough to chew on.

The B-side is arguably better here, being a downright swingin' take on "Walking On New Grass". You can just picture audiences being driven wild by the uptempo devil-may-care tale of musicians on the road.


The line-up of The Airchords, in common with many Irish bands of that period, was volatile. However, so far as I can tell at this point they would have consisted of Pat Lynch on vocals, Tony Lynch on guitar, Ernie Berkenheier on bass, Sean Kinsella on drums, Emmet Wynne on trumpet, Dermot Ryan on sax and trombone, Arthur O'Neil on sax and accordian and Myles Mooney on guitar.

The brilliant Irish Showbands website has much more information on the boys here, and may be useful if you want to track their career from its mess room beginnings to its chart peak.