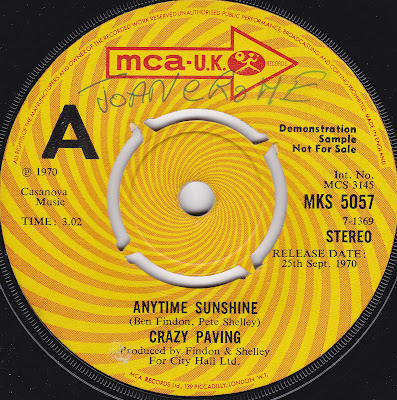 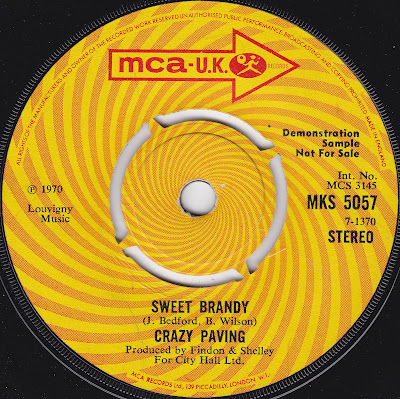 Another burst of sunshine from songwriter Pete Shelley

Right back at the start of the year we took a dip into the pre-Alvin Stardust world of seventies songwriter Peter Shelley. "Paper Chase" was probably released far too late to pick up anyone's psychedelic pop pocket money, and as such came nowhere near to charting, but gave a good impression of Shelley's enviable pop songwriting chops.

Later on in the same year, "Anytime Sunshine" was handed to the group Sir Percy Quintet, who had previously issued a 45 on MCA entitled "She's Such A Good Looking Girl". On this occasion, they for undisclosed reasons opted to go under the name of Crazy Paving, and showed that Shelley had more tricks up his sleeve. Breezy pop like this was everywhere in 1970, but in terms of style, "Anytime Sunshine" is the full 50mph open-top rush down a country A-road, like The Love Affair with less adolescent pounding and pleading and more adult aspirations. Airy strings meet euphoric vocals, and a day out in bright sunshine with a partner in fashionable sunglasses is yours for free for the three minutes it plays.

The B-side, on the other hand, is a lost swinger which I'm surprised hasn't made its way into any mod DJ playlists yet. Repetitive, insistent and jam-orientated, very much like the "Turkey" flip to "Paper Chase", it nonetheless chugs and grooves in such an insistent way that you too will succumb to its boozy charms. It's like "Mony Mony" for people who crave sugary liquor.

Such a great pop song. Bubbled under but I never heard it played on the radio in NY and didn't discover it until maybe 30 years later.

What a smashing slice of pop, very uplifting

Thank you so much for such a rare group. I only heard a first song,as a teenager on my cousin`s tape recorder. And never more,nowhere else ever.Apparently, that were additions,to not leave empty place on tape. By the way,there was another,still unknown wonderful thing,which is also more than 45 years I can not hear again,but I well remember first phrase -" Come on baby, make me happy". Maybe you recognize this song and who performed it?

Hi Андрей - Would that be "Dance The Slop With Me"? https://youtu.be/jJCT6zX85Q0

Of course this is it,a song that I unsuccessfully looked for forty years.Thank you,so much!