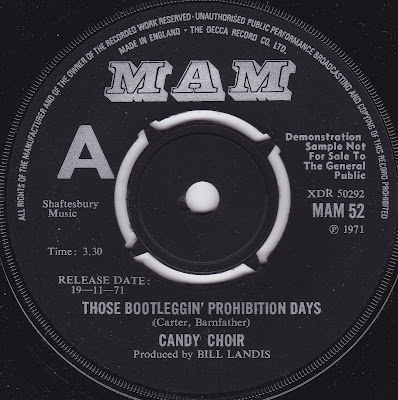 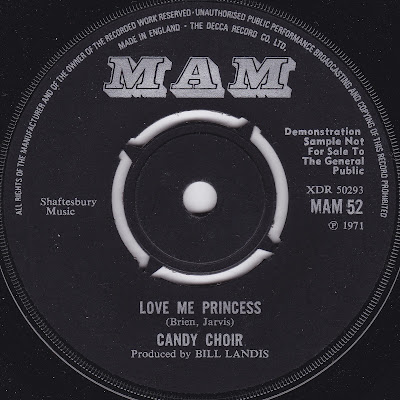 When "I'm A Hog For You" by Erkey Grant and The Eerwigs re-emerged on the Rubble compilation series, there was some confusion about who the oddly named combo were. Well, The Eerwigs were this Kent combo under an early name, and after that wiggy R&B number failed to tickle the public's fancy, they morphed into Candy Choir (after a brief spell as Plus Four - God, this business is confusing sometimes).

Their sixties bread and butter mainly stemmed from acting as Crispian St. Peter's backing group, but their ambitions clearly lay in striking out as a popular force in their own right. Ostensibly a pop group despite their promising sounding popsike styled name, their debut 45 for CBS "Children and Flowers" showcased their tight vocal harmonies and intricate arrangements, but didn't sell well. Nor did their second outing for that label, "Alexander's Rag Time Band", and by 1970 they had been dropped on to Polydor for two further singles, "Why Do You Cry My Love" and "Magical Spiel" (with Barry Ryan) neither of which improved their standing.

This one-off 45 on MAM was their last hurrah, and as ever showcases their marvellous harmony sound but wastes it somewhat on a novelty A-side. "Those Bootleggin' Prohibition Days" is somewhat in keeping with the ironic period pastiches which began to drip out of the early seventies, but is charming without being particularly memorable. For a better track which is much more in keeping with the group's style, the flipside "Love Me Princess" is more worthy of a spin - romantic and mushy but so beautifully performed you'll forgive them any cliches.

The group originally consisted of Brian Hatt, Eddie Wheeler, John Pearce and Danny Beckett, but by the point of this record Wheeler had quit to join Vanity Fare. Brian Hatt later joined the Decca-signed group Wheels with his old boss Crispian St. Peters, and Danny Beckett went on to produce the likes of John Miles and The Influence.