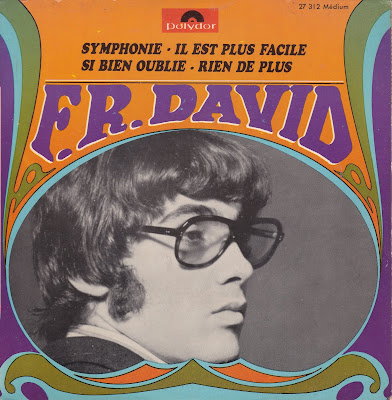 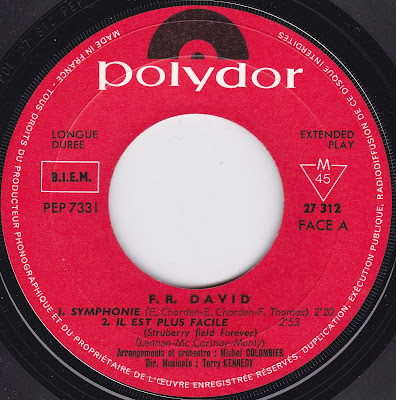 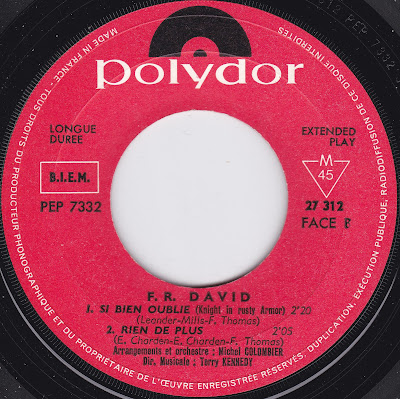 F.R. David explodes all over the blog for you

Outside of France, the singer F.R. David - born Robert Fitoussi - is mainly remembered for one thing; his global hit "Words". Its ringing, chiming and despairing melodies about his emotional constipation seemed to appeal to all the women of the world who liked to think that beneath their man's stony exterior lay hidden affections and depths. Perhaps along the way, it attracted the men that applied to as well. On first release, I must admit I found it somewhat wet and irritating, but in my old age I've developed a sneaking affection for "Words".

The problem with having one large hit is inevitably it overshadows the rest of your career - how many times have we heard that before? - and in F.R. David's case, that's particularly unfortunate. He's a much more interesting performer and songwriter than he's been given credit for in the UK, having somewhat credible sixties origins. He began his career in 1965 as a member of the garage band Les Trefles who changed their name to Les Boots after one EP. Success was not forthcoming, so he split to go solo and initially issued this, which was pretty wigged out by the usual standards of French pop.

Track one "Symphonie" is the tune to pay attention to. Riddled with meandering orchestral arrangements, David's falsetto trilling and accompanied with a somewhat psychedelic promotional video which seemingly references Synesthesia, it's French chanson pop with a microdose of LSD. Like many French releases of the period, you can tell the production and arrangements are hemming in the potential wildness of the track - the stench of freshly laundered recording studio lab coats and conductor's bow ties never feels far away - but it's a fascinating piece of work from an unlikely source.

Track two is a cover version of "Strawberry Fields Forever" which reduces the grandness of The Beatles original vision to a melancholy, reflective ballad. It's not the worst version of the song I've heard, but it lacks a real point. The cover version of "Knight In Rusty Armour" and the likeable "Rien De Plus" on the flipside are more interesting.


This isn't the first time we've touched upon David's early work on this blog. We also took a look at his work under the faintly ridiculous name The David Explosion/ Cockpit not so long ago, whose "Father Machine" track has all the dystopian, mellotron infused elements you'd expect of a "Phantom Power" era Super Furry Animals track.

F.R. David has been somewhat quiet since his eighties peak, but occasionally pops his head up to release singles and LPs in France, issuing "Your Love Shines" and "Paris Is Her Home" in 2018. Beyond those occasional forays, he generally contents himself with writing songs for other artists these days, perhaps having earned enough royalties from his biggest hit to have a comfortable semi-retirement.