Magnet - Something To Remember Me By/ Everything 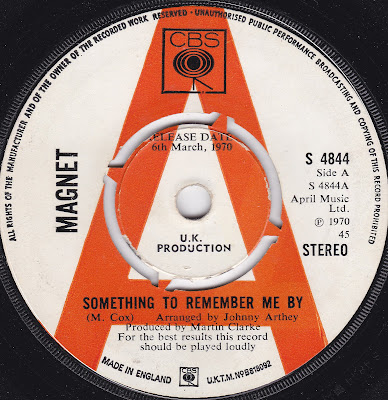 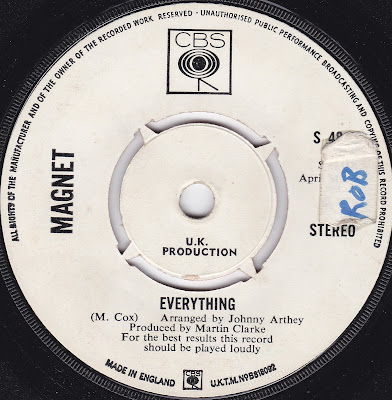 Final offering from an under-discussed supergroup

The name Magnet is probably familiar to readers who like to delve deep into compilations of sixties obscurities - their debut B-side "Mr. Guy Fawkes" found its way on to both the "We Can Fly" and "Electric Asylum" series.

You could argue that they should be better known than that, however. Consisting of Mick Cox (ex-Them and Eire Apparent) on lead guitar, Keith Evans (ex-Downliners Sect) on bass, Eddie Middleton (ex-Pendulum) on drums and Tony Kelly on guitar and vocals (who, for his part, played with Don Partridge) they were like a supergroup consisting of members of cult sixties combos. Enough to moisten the palms of collectors everywhere, you'd have thought.

If "Mr. Guy Fawkes" displayed a certain amount of psychedelic whimsy, the A-side showed where the group were really at. "Let Me Stay" is a long, drawn-out rocker which has more in common with Joe Cocker or heavy west coast rock than toytown.

"Something To Remember Me By" continues in that ilk, but is a sharper, more commercial number, filled with riffs Free or The Ides Of March wouldn't have said no to and a tight, propulsive drive. Had "The Old Grey Whistle Test" been running in 1970, it seems safe to say the group would have been featured.


It wasn't though, and general lack of exposure inevitably contributed to the group releasing flop number two. Despite their obvious talent and credentials, CBS clearly didn't want to trouble themselves with a band who couldn't shift records, and this proved to be their final collective effort. Mick Cox went on to solo projects and The Mick Cox Band, and Tony Kelly also released solo records through Polydor and Goodear in the seventies. The whereabouts of the others isn't so clear. Perhaps they should have made good on their promise to ensure we remembered them, eh readers?