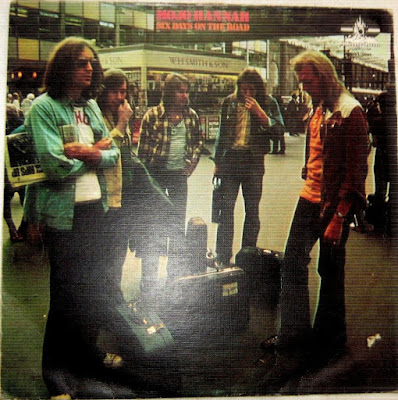 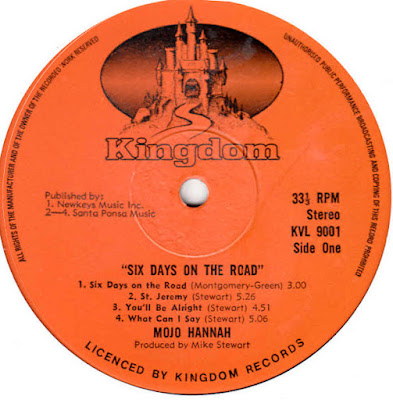 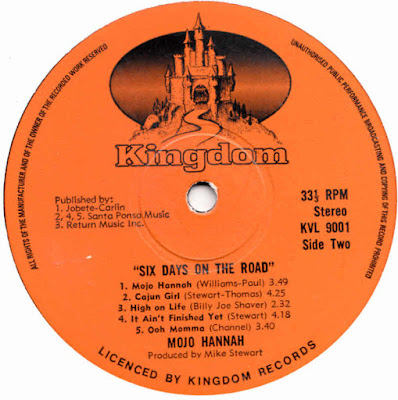 Mojo Hannah first came to my attention when a few months back, somebody wised me up to their hypnotic and delightful 1973 single "St. Jeremy". Sounding for all the world like a probable hit, "St. Jeremy" contains earthy early seventies rock grit in its fingernails but also the flamboyant sounds of a Cockney Rebel-esque fiddle and a pounding, repetitive and very vaguely artrock structure. It sounds like something you'd expect from some artschool glam rockers.

Hold that thought for a second, because Mojo Hannah were actually formed by ex-Sweet boy Mick Stewart, who was with that group for a mere year between 1969-70. On the other hand, don't don a pair of silver platform boots and put away all the breakables just yet. Far from being a stomping record filled with rockers about teenage rebellion and ballrooms being somehow "blitzed", or even a stylistic follow-on from The Sweet's earliest bubblegum days, the Hannahs largely produce a solid approximation of Southern country-rock across both sides of this LP.

"Six Days On The Road" is largely straight-ahead bar-room country rock, with plenty of squeaking cattle gut and songs about living one's life as a somewhat raucous individual. For fans of that genre, especially those who like it raw, unpolished and untroubled by slick production, there's lots to love here - the group sound as if they're on stage in front of you pounding their way through a series of songs which will probably mention Louisiana or the Mississippi Delta any second.

For my tastes, they're at their most interesting when they get into a stoned, hypnotic groove, and "St. Jeremy" is the absolute ace in the pack from that point of view - I was originally going to buy the single, until realising that I could obtain a copy of the whole album cheaper - and "Cajun Girl" isn't half bad either, with a gorgeous electric piano line combining with a repetitive beat and some beautiful close vocal harmonies from the boys. Excerpts from both tracks can be found behind the link, but don't necessarily treat them as entirely representative of the rest of the album.


Besides Mick Stewart on guitar and vocals, Mojo Hannah consisted of Mike Fudge on violin, Joe Gillingham on keyboards, Chris Hunt on drums, and Paul McCallum on keyboards and violin. After this LP was released on the small Kingdom Records in both France and the UK, and failed to sell in great quantities, they seem to have disintegrated. Chris Hunt went off to do session work for the likes of Van Morrison, Joe Gillingham worked for Buddy Knox, and Paul McCallum did some sessioning for Dana Gillespie.

Download it in full here, or listen to two sample tracks below:

This a really a superb posting, this album is very hard to find !!!

Thanks Albert - oddly though, the LP is cheaper than the single (at least wherever I've looked!). Go figure...