Reupload - The London Boys - Eyes of Kazan/ All My Life 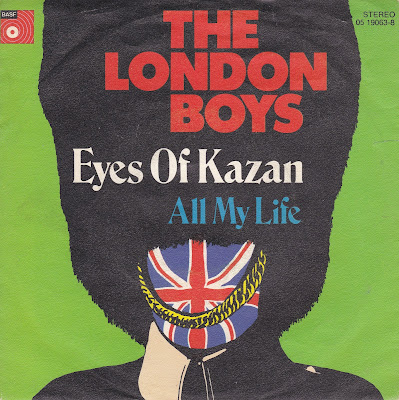 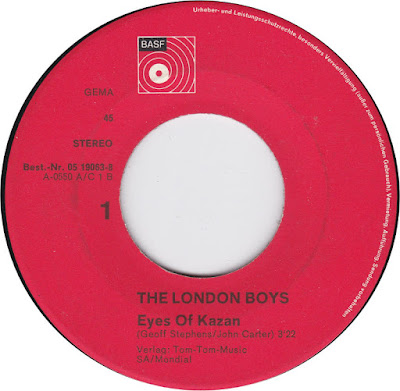 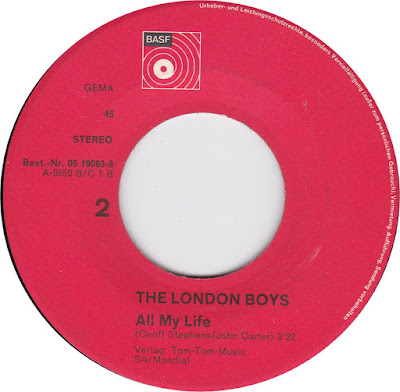 There are, to the best of my knowledge, two bands with the "London Boys" moniker. One seemed to be a project of the jobbing songwriter (and Flowerpot Men member) John Carter. The other was an eighties Eurodisco act with flashy dance moves who somehow ended up doing backing vocals to charged political pop on Microdisney records (apparently angrily suggesting to Cathal Coughlan that he was sick in the head before they sang backing vocals to lines such as "There's nothing wrong with the young would-be rich/ that a headful of lead would not cure"). It shouldn't be too tricky to work out which one this is.

"Eyes of Kazan" is an odd release for two reasons. Firstly, it's a slice of psychedelic pop which was issued in 1971, long after most record buyers had shown any signs of caring about this kind of thing. It was also released in Germany only, failing to reach the shops in any other European markets (including the UK). I can only speculate as to why this was - it's possible that it was an old John Carter composition which had been gathering dust which BASF were persuaded to issue, but the (slightly cack-handed) stereo mix suggests to me that it's more likely to be a seventies recording.

It's actually pretty good as well. There's a copped Beach Boys bass riff (from "You're So Good To Me") and a thumping, stoned McCartneyesque feel to the whole thing, and while it lacks the necessary hooks to truly sound like a hit, it's neatly persuasive and proof positive that when digging the record racks for psychedelic pop, one needn't stop at 1969. There are other gems to be found beyond that end-date.

John Carter wrote and performed some great songs. Love the B side here - gorgeous. Makes me feel like it's Saturday morning and Bri an Matthew has unearthed another little gem for us.

Thanks John - that's a wonderful compliment!