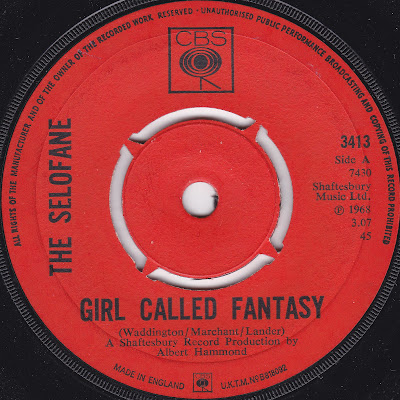 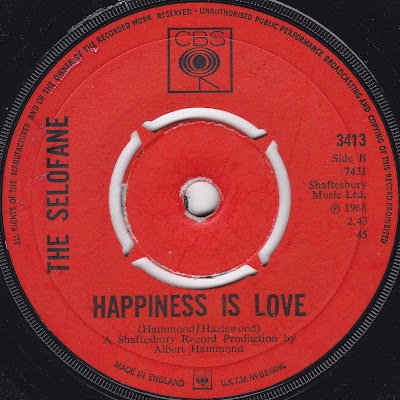 The Selofane were a group who were absurdly large in terms of their overall membership size - regrettably though, so far as record sales were concerned, they never quite made the grade.

Despite this, there's little doubt that this, their first single, had an strong commercial sound, being filled to the brim with rich, loved-up harmonies, a powerful Albert Hammond production and a - for the time - vaguely exotic Europop sound. Coming on like The Love Affair with their dancing shoes off and their work at its most dreamy, "Girl Called Fantasy" sounds like a perfect accompaniment for shoreline romancing for the mod boy and mod girl on holiday. Maybe.

Sadly, both this and their follow-up "Shingle IAO" failed to chart and are somewhat obscure now. The flipside of "Shingle", the heavily phased "Chase The Face" has become a cultish favourite among psych collectors in recent years, but remains strangely uncompiled. It's only a matter of time.

The group's personnel is going to be an epic chore to list, but for both these 45s Arnie Arnold played sax, with Alex Gavin on organ, Jon Gobin on vocals, Geoff Hulme on drums, Jud Lander on lead guitar and harmonica, Les Martin and bass and the enigmatically named Spider on trumpet.


With such a bloated line-up, you would have thought that at least a few of these members went on to other signed groups, but I'm drawing a blank for all but one. Judd Lander made up for the lot of them by becoming Britain's most successful session harmonica player, appearing on the likes of "Karma Chameleon", Orange Juice's LP "What Presence?", Aswad's "Rebel Souls", Madness's "Yesterday's Men", The The's "Infected", Paul McCartney's "This One", Prefab Sprout's "Jordan", Annie Lennox's "Medusa", The Spice Girls' "Say You'll Be There", and Richard Ashcroft's "Alone With Everybody", and that's before we even mention his work for The Beach Boys and The Proclaimers. Sometimes the guy at the back honking on his harp comes out on top in the end.