Reupload - Trevor Burton - Fight For My Country/ Janie Slow Down 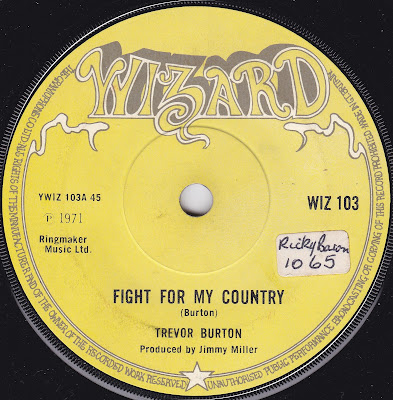 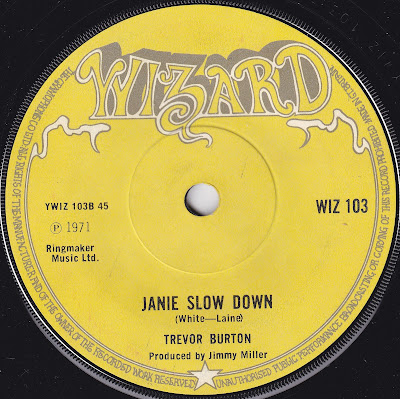 After Trevor Burton left The Move, he had huge plans for his future. Not for him the usual course of putting an advert in Melody Maker for musicians and waiting for the results - on the contrary, he wanted to tap into the much in-vogue (at the time) practice of forming a supergroup of respected and talented musicians.

The ridiculously named Balls were born, consisting of Brummie wunderkinds like Steve Gibbons of The Uglys, Richard Tandy (later of ELO), and Denny Laine from The Moody Blues. In truth, the formation of the group was muddy, complicated and fraught with difficulties and intense arguments. A revolving doors policy appeared to be in operation, and describing the personnel coherently here would be a task and a half. If you're really interested, the excellent Brum Beat website has patched together a very patient and detailed overview of their history here.

During the chaos of rehearsals and recording, it would seem that only one usable piece of work emerged, and that was this single, which consisted of Burton, Steve Gibbons and Denny Laine. Originally released under the group's name Balls in January 1971, it failed to sell, and was subsequently reissued as an edited version in 1972 under Trevor Burton's name. That also flopped, and the track was then reissued again on Birds Nest Records in 1975 under the name B L and G (with the track retitled as "Live In The Mountains"), where it also did precisely nothing. After that point, clearly everyone involved simply gave up.

I suspect the single's sales chances were harmed by the fact that it only appeared an entire year after Balls ceased to exist, but it's not hard to hear why many people felt the track had enormous potential. Strident, cocksure, anthemic and unusual, the buzzing analogue synths spin throughout the track like helicopter rotary blades while Burton and the boys build a naive but relatable anti-military message over the top. "Why don't we all go and live in the mountains?" Burton roars, and far from being the usual pile of old hoary supergroup mush, this actually sounds like psychedelic Brum beat crossed with early electronica and glam - a squidgy, messy soup of ideas taking place on the cusp of two decades which shouldn't really work, but does so brilliantly. I'd be willing to bet that at least one member of the Super Furry Animals likes this one...

After Balls petered out, Steve Gibbons went off to form The Steve Gibbons Band, and Denny Laine enjoyed colossal success with Paul McCartney in Wings, co-authoring "Mull of Kintyre" in the process. To my ears, both sides of this record are preferable to that bagpipe festooned anthem, but your feelings may differ.

If the previews below fail to load, please access both files at this link.

Interestingly-named label, bearing in mind what his former bandmate Roy Wood would go on to do...