Lucien Alexander - Baby You've Been On My Mind 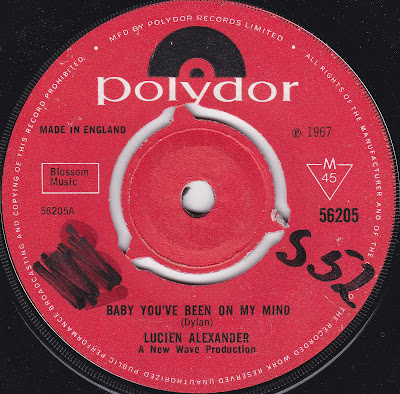 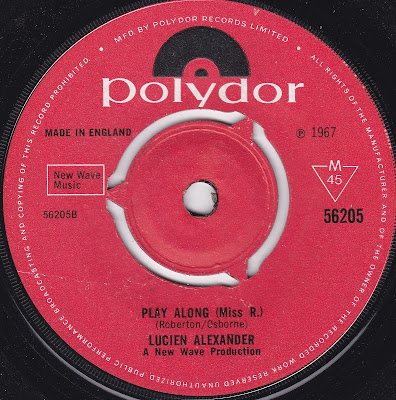 Who would dare to count the number of Bob Dylan covers that littered the sixties, hits and non-hits alike? Some honourable attempts have been made to compile the best Bob covers on to single compilations, and a vinyl copy of "It Ain't Me Babe" sits proudly in my collection, pulled out on the rare occasions that I fancy hearing Bryan Ferry, Spirit, Johnny Cash and The Tremeloes in one sitting.  The obscurities, though? Would you want the job of rustling through every crate in the land past all the acetates of English folk groups and workshy beat combos plundering his songbook?

Nonetheless, "Baby You've Been On My Mind" is actually a good one-off obscurity by the mysterious Lucien Alexander, beautifully arranged, sweetly delivered and sounding distinctly like a possible summer hit. Unfortunately, given that it was issued in December 1967, that was never going to be.

The flip "Play Along (Miss R.)", here in a rather scuffed and scratchy guise - sorry kids - isn't significantly different, but has a slightly British Isles folk-rock feel to it. Think Al Stewart or David McWilliams at his least contemplative, and you're almost there.

All of which begs the question - who was Lucien Alexander? Like The Peep Show, he clearly had a deal with New Wave Music, who were an independent production company owned by Record Mirror journalist Norman Jopling and the infamous Peter Meaden, but this was obviously the only recording of his they managed to place with a record company. It's not unlikely that there are other acetates out there, so if anyone else has seen or heard anything else by him - or better still, actually knows who he is - do let me know.

If the files fail to preview properly, please follow this link to load them on a separate page.


Thank you so much, David