Nimbo - When The Swallows Fly/ Noticeingly By 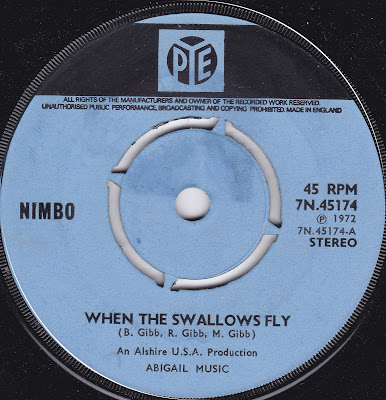 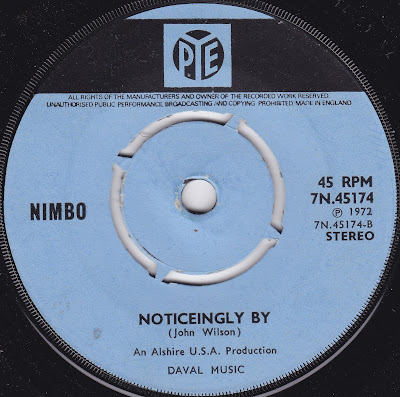 There's a tendency to think that once the sixties finished and a new decade dawned, everyone involved in music realised they had to move on and buck their ideas up fast, and start thinking of the next "big sound". In reality, quite a few bands carried on as normal, even when barely anyone else noticed.

Pye was actually a fantastic label for issuing mildly psychedelic or sixties pop sounds long past the point anyone else cared, and for this reason Sanctuary Records dedicated album four in their "Psychedelic Pstones" series to post-1969 recordings and didn't struggle to fill a whole CD at all. Nimbo are one of the groups sitting snugly at home on the record, with their debut 1971 single "Forget Her" - and a sound which made it perfectly clear that they were struggling to forget The Beatles.

Less easily found and certainly less talked about is this, their follow-up, which has an ambitious and damn fine reading of The Bee Gees "When The Swallows Fly" on the A-side, which explores every last avenue afforded by the song, turning into a towering rock ballad. Possibly too reflective and subtle to make it on to daytime radio, it remains a deeply obscure release.

Over on the flipside, though, the group are up to their old Beatle-loving tricks, and turn in an original song which chimes and jangles with old-school, naive beat merriment. If it feels a little rushed in places, it makes up for that with enthusiasm and charm, and was surely one of the least 1972 sounding tracks issued that year.


The group seemed to consist of John Wilson on vocals and lead guitar, Gordon Smith on bass and Dave Powell on drums.  They eventually became The Rockits and ended up on Mowest records, until, perhaps appropriately, the pair joined up with ex-Badfinger members Tommy Evans and Bob Jackson to form The Dodgers, who had a slightly higher profile than any of their previous groups.

If the preview boxes below fail to load properly, go straight to the files here.

Email ThisBlogThis!Share to TwitterShare to FacebookShare to Pinterest
Labels: Badfinger, Nimbo, seventies, The Dodgers, The Rockits

Your critiques on both sides of all the 45's that you feature help me recall what it was like nipping down the record shop in those days.In particular, maybe others will concur, the lack of expectation for the hitherto unheard flip side. Usually it sounded like something simplistic thrown together in 5 minutes with rhyming couplets that would be frowned upon by primary schoolteachers - even by some of the most revered artists. Having said that I'd have been relatively happy with this one.

Oh God, even some of the early Beatles B-sides are rushed and dull. Surprising how many good tunes there are nestling on the flip of flops, though.