Reupload - Kris Ife - Give and Take/ Sands of Time 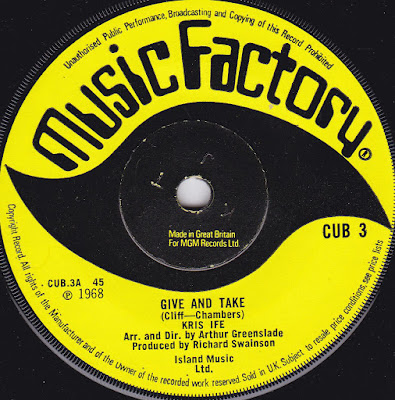 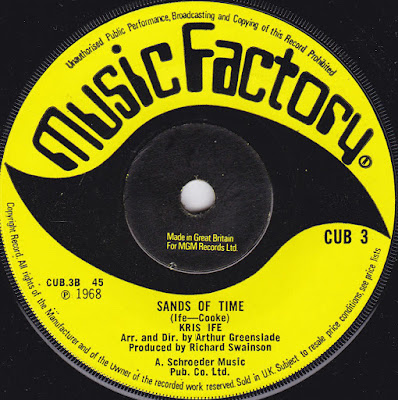 Pop music history is littered with people who were relatively successful for about six months before losing relevance. Often their career's decline from mid-table chart finishers to niche fanbase performers isn't too unkind - they might suffer the ignominy of the occasional "What Exactly Is Kate Nash Doing These Days?" styled article, but they're still able to maintain a gentle media presence.

Others just disappear from the gaze of the mainstream press without explanation. Kris Ife was one example - as a member of The Quiet Five in the mid-sixties, he managed a couple of well-received singles which just about charted, "When The Morning Sun Dries The Dew" and "Homeward Bound". When he jumped off that particular ship to forge a solo career, it would seem that record companies invested a great deal of faith in him building on those foundations - MGM financed three singles in total (including this one on their short-lived Music Factory subsidiary) and Parlophone two. United Artists gave him a third crack of the whip in the late seventies.

Despite the promise, as a solo performer he never really seemed to shift units, and by the mid-seventies his recorded output dried up. That's not to say that he didn't leave a very firm mark on music history in the process, mind - his version of "Hush" was popular in clubs and was the one that members of Deep Purple heard in a Manchester nightclub before deciding to record it themselves. Without him, maybe Kula Shaker would have been denied an extra top five hit... and far beyond "Hush", his Mark Wirtz produced single "Imagination" is one of the more unreasonably ignored bits of lost British psychedelia.


His version of Jimmy Cliff's "Give and Take" is also firm, driving and an arguable case for the "Borderline Northern Soul" files. It adds urgency to the track and a particularly forceful brass section, and the only thing stopping it from being a great record (as opposed to a good one) is the slightly over-considered production. To have been a proper barnstormer, I sense this one needs a bit more roughness - as it stands, it has a slight cabaret edge it could do with losing.

Kris carried on recording until his untimely death in November 2013, his last release being a CD of skiffle songs with The Beaver Street Hat Band.