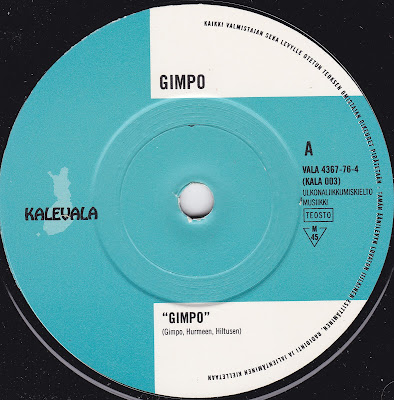 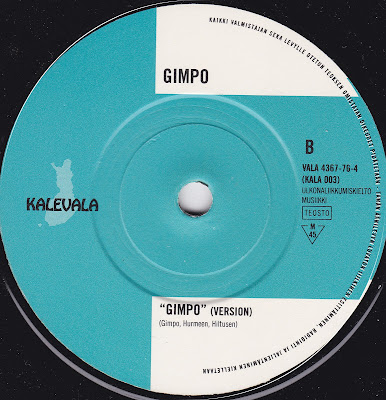 KLF minder and roadie pushed into the spotlight

I've been slowly uploading Bill Drummond and Zodiac Mindwarp's Kalevala singles on to "Left and to the Back" over the last ten years or so for one simple reason - they've been given a place on here as and when I've found them at a price I don't find eye-watering. That has understandably taken quite a bit of time, as they're often flogged at unreasonable prices.

A summary of the (limited) history of the label and its concept can be found here. If the idea was to unleash Z and Drummond's vision of how some fictional Finnish bands mentioned in the book "Bad Wisdom" sounded, however, this is probably the single which lets the fantasy down most. Gimpo, aka Alan Goodrick, was (and presumably occasionally still is) the KLF's roadie and minder, an ex-squaddie who is a well-known character to fans. He filmed the pair burning a million pounds, organises the regular 25 hour rally around the M25 (so he can find out where the road actually goes to) and generally emerges in the background at many of their events, sometimes piping up rather loudly. You can't disguise Gimpo as an undiscovered Finnish pop star - he's Gimpo. He's too loud to be mysterious, and his face doesn't fit into the theme of this series at all.

Nonetheless, we are where we are, and this is what we've got. "Gimpo" is a juddering piece of hard techno-rock using samples of the man talking about his exploits and escapades. "Gimpo Gimpo Gimpo!" voices roar in the foreground, like gowned cult members demanding the centre-stage return of their rightful leader. It's messy, noisy and chaotic, all hard edges and jagged pulses, but probably not the best KLF related record you'll ever hear.

The not-at-all safe for work flipside is really a sweet and simple tale of Gimpo failing to score some crack off a Soho prostitute, in the man's own words, and is a salutary lesson for anyone who thinks "But she stole my drugs" is an adequate defence to offer a police constable for your irate actions. When the KLF burnt a million pounds, Gimpo claimed his mother was appalled, exclaiming "You hang around with people who do things like that?!" I can only wonder if she's heard this single. Probably not.
Read more »
Posted by 23 Daves at 08:00 No comments:

Reupload - Starbreaker - The Sound Of Summer/ Arizona Lost and Gone 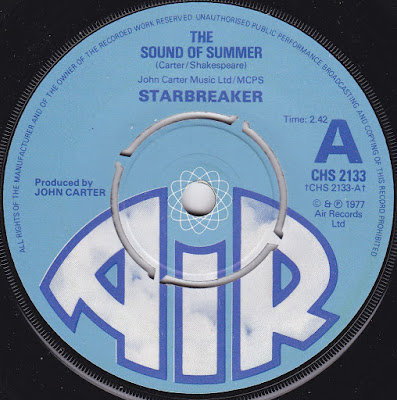 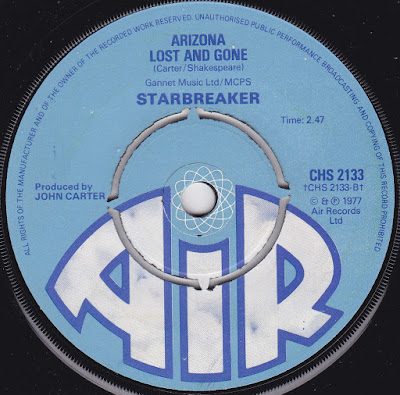 John Carter should need no introduction to most of you, and yet "should" is probably the operative word there. While I've no doubt that many "Left and to the Back" readers are aware of his songwriting efforts for projects and bands as varied as The Flowerpot Men, First Class, Manfred Mann, The Music Explosion and The Ivy League, not to mention the efforts released under his own name such as the truly mind-boggling piece of psychedelic pop "Laughing Man", plenty of others won't be.

For the benefit of the people who have yet to delve into his back catalogue, Carter was a songwriter who undoubtedly heard Brian Wilson's efforts from across the pond and immediately decided that this was the future of sophisticated popsmithery as the world knew it. Therefore, a huge rump of his output from The Ivy League in the sixties through to First Class in the seventies dedicated itself to sunny and yet frequently despondent or introspective pop songwriting. The Ivy League's superb "My World Fell Down", later covered by US group Sagittarius to greater recognition, is a fine example of his experiments with an Anglicised approximation of the California sound.  When First Class's "Beach Baby" was issued in the seventies in the USA, it climbed into the Top 5 and most North Americans blithely assumed that it was the work of a Californian group. Unbeknownst to them, Carter had merely penned the track from his East Sheen house with his wife Gillian Shakespeare and given it to a studio group.
Read more »
Posted by 23 Daves at 08:00 2 comments: 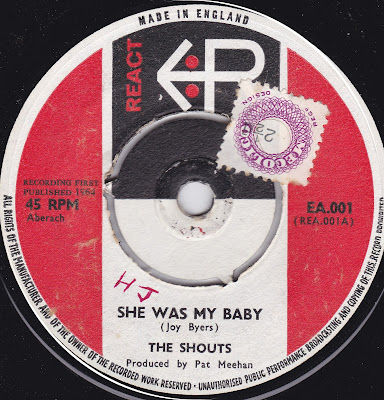 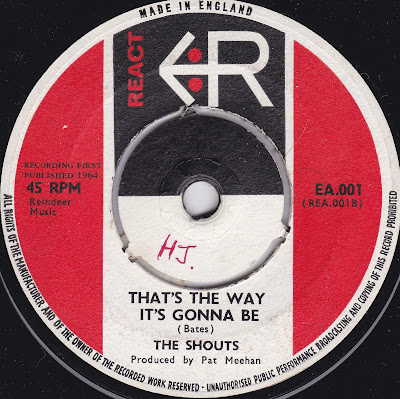 I'm sure there's a fascinating story behind the tiny little React label, which managed only two releases (this and Tony Washington's "Crying Man", written about on the blog here). Without being able to find the details anywhere, I'd willingly bet money on it being a project begun by a young go-getter in the biz determined to strike out on their own, in the same manner as Joe Meek with Triumph - but its legacy would suggest it ran out of money or enthusiasm (or both) really sharply. Put simply, the majors dominated the early to mid sixties ruthlessly and independent labels were shoved off record store racks everywhere in favour of whatever the "big boys" wanted to push to the public.

The fact they were out-resourced is no indication of overall quality, though. "She Was My Baby" is a great little stomper which has a raunchiness and rawness a lot of their beat rivals lacked. This a party-stormer which wouldn't have been out of place on a regional American label, and really should have been a hit. The group consisted of Tim Bates on lead guitar and vocals, John Reece on bass and vocals, Jem Field on sax and vocals, Eric Baker on keyboards and Victor Clark on drums, came from Liverpool (citation needed -ed) and backed Gene Vincent on tour, backing him on the UK LP "Shakin' Up A Storm".

They were even dropped on to the bottom of the bill of the "Big Beat Tour" of 1964 alongside The Honeycombs, The Puppets, The Beat Merchants, Daryl Quist,  Gene Vincent, The Applejacks, Lulu and Millie, but didn't get a page in the accompanying programme, meaning we're frustratingly lacking any clarity on the group's history.
Read more »
Posted by 23 Daves at 08:00 No comments:

Links to this post
Email ThisBlogThis!Share to TwitterShare to FacebookShare to Pinterest
Labels: Gene Vincent, sixties, The Shouts

The Pattersons - I Can Fly/ An Cailin Deas 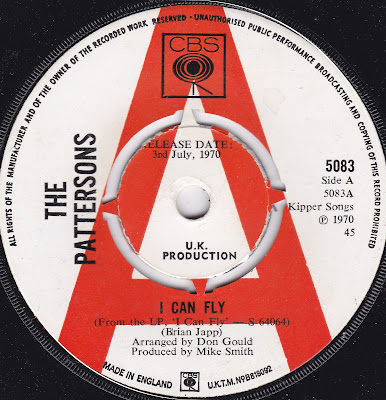 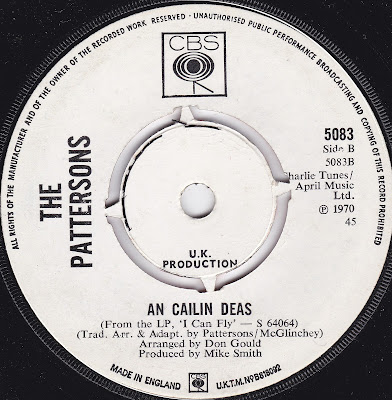 It's probably surprising to nobody, but songs about flying were everywhere during the generally accepted(*) 1967-1970 peak of popsike, from George Harrison's attempt for The Beatles, to Windmill's "I Can Fly", to the Portebello Explosion's "We Can Fly", and on the list goes... as we well know, when reaching for the rhyming dictionary "fly" is very close to "high" indeed, and that was a sensation groups were keen to communicate at that time.

This single from Irish folkies The Pattersons has no relation to Windmill's single, though, and is actually a genuinely beautiful, intricate creation, brimming over with subtle wah-wah guitars, saxophones, strings and close harmonies across a blissful three minutes. Lyrically, it's disappointing and doesn't stray far from fairly standard Hallmark greetings card waffle about "peace on earth" and tranquility, but the song itself weaves its spell magnificently, sounding more like the work of the Mamas and the Papas at their finest. It's sumptuous, readers, and I'm really shocked its sat under the radar for so long - weren't we supposed to have picked this particular barrel dry long ago?

The Pattersons were a family group (initially Billy, Christine, Dorothy and Ronnie, until Christine bailed in 1969) from Letterkenny in County Donegal, who were big news in Ireland at that time having their own TV series in 1969, and even appeared on the "Morecambe and Wise" show in the UK. While their records sold well in Ireland, with their first single "I Don't Want To Be A Memory" climbing to number two in the Eire charts, their efforts are less commonly chanced upon in the UK - their label CBS released most of them there, but the British public weren't keen purchasers of most of their output.
Read more »
Posted by 23 Daves at 08:00 2 comments:

Links to this post
Email ThisBlogThis!Share to TwitterShare to FacebookShare to Pinterest
Labels: folk, seventies, The Pattersons 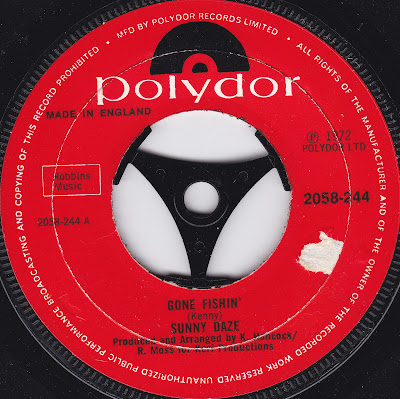 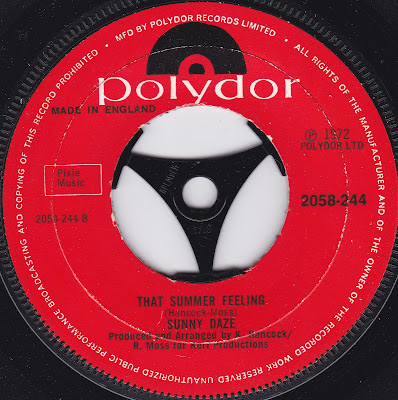 From its late sixties to early seventies output, the UK branch of Polydor is a fascinating label for the crate-digger. During that period it licensed a lot of product from independent production companies, meaning the catalogue is overflowing with odd one-off 45s filled with novelty pop, freakbeat and Soho club basement soul. Some of it is also frighteningly scarce these days, if frequently available for reasonable prices when it does show up.

Here's another obscure oddment to add to the list. "Gone Fishin'" had a long life prior to this recording, perhaps being most appreciated in its guise as a Bing Crosby and Louis Armstrong duet. Oh, how we'd all love to live in Bing's world, where David Bowie is a neighbour and drops by for a Christmas chat and sing-song, and he's forever popping round Louis' house for a cup of coffee but Louis is always out with his rod. But I digress...

What we have here is a slightly more subdued, less showbiz cover of the song which brings a lazy hippy folkiness to the original concept. The arrangements are closer to a Kevin Ayers LP than Hollywood, and it's as tranquil as a quiet day on Wanstead Flats. The rinky-dink arrangement palls a little towards the end, but on the whole it's a charming bit of hippy trad-influenced pop.
Read more »
Posted by 23 Daves at 08:00 No comments: