Epic Spleandor - It Could Be Wonderful/ She's High On Life 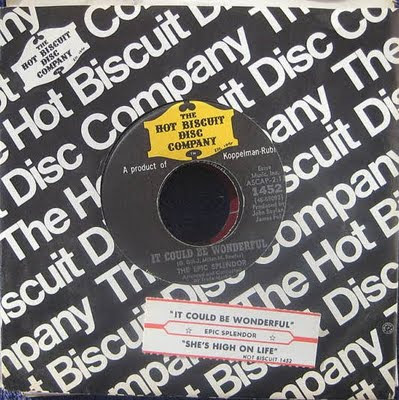 American bands covering the work of British bands was fairly common practice back in the sixties, particularly if the Anglo-act in question had a number of catchy tracks which had yet to find favour across the pond - and indeed, such behaviour often worked in reverse too. This, however, surely takes the (hot) biscuit. "It Could Be Wonderful" was an utterly ignored track by The Smoke, a band who had made it reasonably big in Continental Europe but meant very little in Britain. Recorded at the beginning of their stint with Island Records after being dropped by Columbia, it's a pleasant, dreamy, woozy and actually quite slow number which sold in very low quantities.

Googling the Internet seems to reveal that most forum-dwellers and bloggers out there prefer The Smoke's original, but for me it's this version that really rips into the song's potential. Turning the tempo up significantly, filling the arrangement out with horns, and pounding on the drums, The Epic Spleandor created a piece of fantastic Motown-derived mod pop, utilising the kinds of rhythms which end up contributing to something unbelievably danceable and difficult to ignore. Propelling itself along with such gusto that it's all over in just over two minutes, it's one of those records with such urgency and force of personality that you feel compelled to play it twice, maybe three times in a row. Whilst The Smoke's version focusses on a dreamy, disconnected feel, this one has a more euphoric, urgent rush about it - perhaps not quite derivative enough to pass as Northern Soul, but certainly a lot more compelling than a great many records released by inauthentic artists which did fit that particular rubric.

The Epic Spleandor were a New York based act formed from the ashes of Little Bits Of Sound. Their first release "A Little Rain Must Fall" was a regional hit on Hot Biscuit, the newly launched subsidiary of Capitol. "It Could Be Wonderful" was supposed to be capitalise on this initial interest, but failed utterly to click with the American public, and the band were promptly dropped by the label. Records like this one, and the West Coast styled flip "She's High On Life", make you wonder what might have been had they been allowed to continue. This is one of my favourite US singles of the era, and I'd love to hear it a lot more often than I do (which at the moment is "never" outside of my house). It doesn't seem to sell for a great deal on ebay, either, so the question must surely be - am I alone in my love of this record, or does it have an untapped audience waiting for it?