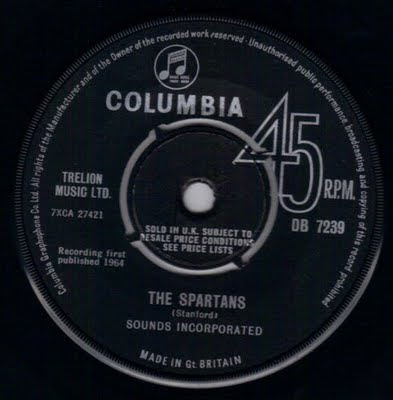 The demise of the instrumental rock and roll combo is something I've mourned on "Left and to the Back" a number of times. There's no conceivable reason why such groups should have fallen out of fashion by the mid-sixties beyond the fact that listeners seemed to want groups to have an obvious focal point, a notable communicator, a role that only a lead singer could easily provide. Beyond that, the advantages of instrumental rock were obvious - it's more universal than vocal forms with their language barriers from one nation to the next, and there's frequently a sense of atmosphere and drama in these recordings which in the hands of other artists could be ruined by naff or disagreeable lyrics. The images painted by The Shadows' "Wonderful Land", for example, are for me a lot more enjoyable than those dished up by The Stones "Under My Thumb", a good track dirtily smeared by sneering, sadistic lyrics (and yes, at this point I am conscious of the fact that I may sound like somebody's Dad circa 1966).

Unlike most of the artists on this blog, Sounds Incorporated did meet with some minor success in the sixties - this record, for example, got to number 30 - but hovered just outside the fringes of mainstream acceptance. They worked with Joe Meek and are notable for having used the Clavioline keyboard before The Tornados did with "Telstar". When you couple that with the fact that they worked with the huge stars of the day, backing the likes of Gene Vincent, Cilla Black and Little Richard (during his UK tour), and even The Beatles on the track "Good Morning Good Morning", their relative anonymity becomes more startling. If nothing else, they were clearly among the most sought after session musicians of the era in Britain.

Of all the Sounds Incorporated recordings, this is probably my favourite. On the A-side rests a pleasingly atmospheric instrumental which proved to be their biggest hit, but on the flip lies "Detroit", an absolute floor-shaker of a track which combines sax riffs with mean, grooving hammond organ workouts and a tight rhythm section. At four minutes long, it's certainly one of the most persuasive mod groovers of 1964, and only recently seems to have been notching up spins by retro club DJs. The two sides of this single show how diverse and skilled Sounds Incorporated really were, as capable of creating Meek-esque atmospheric tracks as they were Rhythm and Blues inspired groovers.