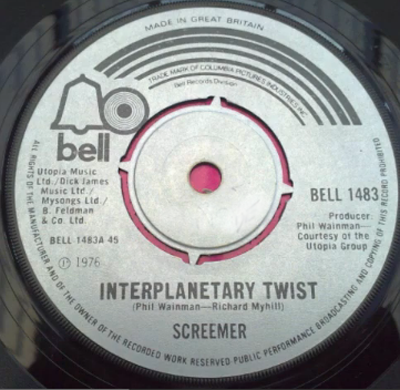 It's another cheap Second Hand record from Bell. Aren't you the lucky ones? Bell were the glam rock label in the seventies, churning out endless pieces of tinsel from their dayglo production line, and it just so happens that it's these records which clog up charity store bins, remainder boxes and even rubbish skips the most. And no, that isn't a lazy, off-the-cuff remark, either - hundreds of rare glam singles recorded by Freddie Mercury under the name Larry Lurex were once found in a skip, discarded by some fool who believed them worthless.

By 1976, glam rock was starting to look a bit worn out, and bands falling back on the genre were frequently disappointed by the time the chart rundown was released. Even the established acts often struggled, so new ones - like Screemer here - found that Britain was hostile to their stomping sound.

In Screemer's particular case, however, one has to wonder if they were a mite too OTT even for the glam genre, if that's possible. I have come across many records in my time, but few have sounded as ridiculously theatrical and camp as this, a tune about introducing rock and roll to the people of the twenty first century (presumably they thought we'd all be blasting around on jet packs and listening to Jean Michel Jarre by now). Starting off with an airy synthesiser noise and a peculiar, Mystic Meg-styled vocal (which you just know the lead singer delivered with a suitably vacant stare), then building into a Rocky Horror Picture Show styled epic number, "Interplanetary Twist" is baffling. It's like The Sweet after they've eaten far too many sweets and are on a sugar rush, or Spinal Tap with some new space-age props. I've never seen a photo of Screemer, but I hope and pray they all wore futuristic space suits and had ridiculously ambitious fringes, otherwise the image I've got of them in my brain will be shattered.

I don't want to trick anybody into thinking that this is some kind of golden nugget of spacerock - although it is actually huge fun for five minutes, which is precisely what all good novelty pop should be. Just thank your lucky stars (no pun intended) it wasn't a hit and we didn't all have to hear it a hundred times, otherwise this could be a very different blog entry indeed.

Once again, the B-side ("Billy") isn't much cop, I'm afraid - but what more did you want from these intergalactic rockers, eh?

(Update - this entry was originally posted in August 2008, and I'm not too sure I care for its dismissive, flippant tone these days, but I suppose this blog was a young pup back then, I was still learning, and I'm entitled to have off days. Whilst I did originally purchase this from a bargain box for 50p, its value has increased dramatically in the years since and it changes hands for daft money on ebay now, the only one of the discs I've so far featured in the "Second Hand Record Dip" section of the blog to do so (to the best of my knowledge). This is largely due to it being featured on a glam rock rarities compilation, and proves if nothing else that my Larry Lurex comment at the start of this entry was somewhat prophetic. One man's junk is definitely another man's treasure.
As for Screemer - who knows? They still seem to be shy.)

According to the Rare Record Price Guide a mint copy is now worth £10!!

I've seen it go for £30 on ebay - as always with these things, it all depends upon how excited somebody gets during the auction process/ how much someone is willing to pay!

I adore this record. Sure, it recycles well-tested glam rock ideas (Peppermint Ballroom Blitz Twist), but the lyrics and the delivery are crazily inventive.