Dora Hall - It's All Over 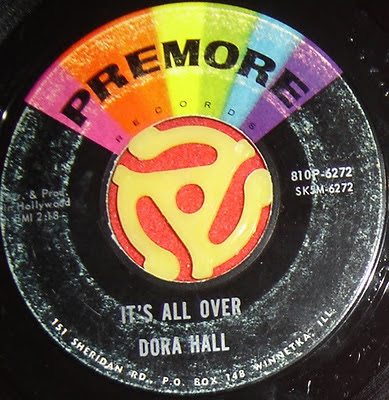 At this present stage in history, you could argue that home-made entertainment probably outweighs "proper" funded entertainment by a small margin. You can click on YouTube and watch endless videos of members of the public trying to be funny, singing mediocre cover versions on their acoustic guitars and Comet purchased electronic keyboards, pointing their cameras at their dogs attempting to dance the cha-cha, or their superstar babies puking, burping or crying about finger nibbling savagery (which mystifyingly some broody/ maternal people have decided to watch millions of times over). If it's a popular video, chances are you'll also be forced to watch an advert beforehand, thereby diverting cash into the coffers of the amateur film-makers in question.

Pre-Internet, before Hampton the Hampster was even a small, hairless pink suckling thing, matters were rather different, and avenues for exposure naturally rather limited. There were very few short-cuts to fame available, and you simply had to slog your way around the unforgiving gig circuit in the hope the hard work would slowly pay off. Or... alternatively, you could marry a multi-millionaire at the head of an enormous business empire and ask him to promote your work. It's the stuff of lottery-win dreams, but this is actually what Dora Hall did. Leo Hulseman, founder of the Solo Cup plastic drink cup dispenser and picnic accessory company, turned his attention to the plastic known as vinyl and decided to give his wife's entertainment career a bit of a boost. That Dora was already middle-aged by the time the opportunity arose presented no obstacle to his master plan, and in fact he would continue in his loyal duty towards her even during her twilight years as a grandmother in her seventies.

If you're American, then, it's completely possible that you will not only have stumbled across Dora Hall vinyl in a junk store, but watched a syndicated television special of her singing with Frank Sinatra Junior amongst other guest stars. So relentless was Leo's pushing of Hall's career that he gave her records away free with plastic drinking receptacles, both long-playing and seven-inch, funded television programmes with her in the starring role, and generally considered no expenditure too much for his other half and star in waiting. What the Executive Board members of Solo Cup made of all this is anyone's guess, especially as the constant manufacture of free records must have put a sizable hit in the company's profits.

There appear to be two popular views on Hall's output. The first is that the woman was dire, couldn't sing or perform very well, and wasted her life pursuing a ridiculous fantasy. The second is that actually some of her output is pretty good with superb production values and some of the best session musicians available (The Wrecking Crew were known to be involved with some Dora Hall sessions). I freely confess I haven't heard enough of Hall's material to sensibly comment on her output overall, but I have heard the supposedly good tracks, and they are indeed of a far higher quality than the scoffers and sneerers would lead you to believe.

"It's All Over" is a prime case in point. Actually beloved of a few Northern Soul DJ's at the moment who happily spin it to no complaints at all from punters, it's a neat little record with fantastic drumming high in the mix, haunting backing vocals, and a likable, gentle and rueful vocal performance from Hall. It's true to say that she's not an astonishing, top-flight singer, but there's enough character to compensate, and the huge, swinging drive behind the record is indeed pure Northern (by accident rather than design as always). Any experienced crate-digger will tell you that there are far, far worse things out there than this, and indeed at the kind of price you tend to find these discs for these days they're actually a steal. The Solo Cup company pressed so much of her material up and gave it out for free that it actually seems to be more ubiquitous in the USA at least than some of the in-demand hits of the period - do a quick search on ebay if you're in any doubt.

Naturally, all this pushing of Hall as a future superstar by the disposable utensils empire came to nought. Her TV specials (click here to see a clip from the 1972 show "Once Upon A Tour") clearly registered in the brains of quite a few confused Americans who promptly filed their childhood memories of her in the parts of their brains labelled 'kitsch', but failed to ignite her career in the manner expected. Still, the company carried on promoting her in one form or another until her death in May 1988, and there's something incredibly loyal and touching about her husband's devotion to her career.

Both sides of this single are available below, and I do apologise for the surface noise on the B-side "We'll Sing In The Sunshine" - it looked as if the previous owner had actually used the record itself as a disposable plastic plate at some point, and even a deep clean couldn't repair the damage.

Thanks for clarifying the date!

Thanks for sharing this gem I really do love her xo

Found cassette tape in my Mothers affects.Sentimental value!Thanks for the info!

Did you know that you can shorten your long urls with LinkShrink and make money for every visitor to your shortened links.