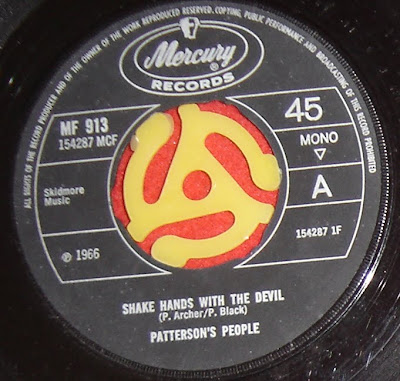 "I just come up from Hades/ To mingle all among you ladies/ Shake hands with the devil..."

There's an attention grabbing first line for a single if ever I've heard one. By 1966 the music buying public had already been treated to a wide variety of artistes using diabolical imagery to turn heads, so this single won't have been anything new - but I'd be willing to bet that it still upset some folks in certain quarters.

There again, perhaps it was actually just largely ignored by the radio DJs for other reasons, but I find that staggeringly hard to believe for a single so good. "Shake Hands With The Devil" is a piece of mod soul which seems from the very first play as if you've known it all your life - and whilst this may be because it falls back on a few cliched riffs here and there (the "Mustang Sally" descend, for example) it's also swings thrillingly. The organ screeches, the vocalists scream, whilst beneath a steady, nagging rhythm maintains law and order. It's the kind of raw and dancefloor friendly sound you'd expect from a single emerging from the USA at this time, but amazingly Patterson's People actually stemmed from the incredibly dull Aylesbury, whose only real claim to fame to this day is being Bill Drummond's retirement town.

The B-side "Deadly Nightshade" has been given rather more attention by compilers of sixties rarities compilations over the last ten years or so, which is baffling as it doesn't sound like anything particularly special to me. It does admittedly have a slightly more psychedelic sound, however, which may add to its appeal to collectors of that genre.

As for Patterson's People, this was their only single. If anyone saw them play at the time or knows what became of them, please feel free to enlighten me and the other readers - certainly, of the British acts I've heard doing material of this style from this period, this record makes them sound like they would have been a very convincing live proposition.

Sorry for the pops and crackles at the start of "Shake Hands With The Devil", by the way. They do clear up after the first few seconds.

just a tip... if you like that kind of rare 60s uk stuff, visit spurensicherung.blogspot.com for the series of uncompiled british 45s called "tommyknockers beat club". they're up to 9 volumes of extremely obscure 7inchers and more are promised.

You need to think again about Aylesbury. You're forgetting the famous Friar's Club!

The group disbanded and one of the members, David Wenden, moved to Africa and continued as a folk musician, sadly passing in South Africa in 1980 at the age of 37.

Well, as well as Dave Wenden there was Patsy Archer and his brother Arthur 'Boy' Archer..who was my step-father.

He worked as a bouncer at Friar's in Aylesbury and passed away in 1988 - sadly I lost contact with his brother.

The. 'P Black' credited as co-writing 'Shake Hands with the Devil' was my cousin Peter. He had a varied career, mainly in creative arts and went to live in Australia many years ago. He had a minor role in Neighbours as Sgt. Mooney. Sadly he passed some years ago now with throat cancer. There used to be a programme on the radio on late Friday afternoons where new releases were played...(think it was Emperor Roscoe ???) and discussed.... And I remember sitting in my front wall in Birmingham waiting for 'shake hands...' to be played ....still have a copy of the 45 :)

i met pat archer and another member of patersons people,i was with the late merrick gordon in the flea pit <the foresters arms in pebble lane in about 1966, i bought the single and still have it,it was always played on the juke box in the flea pit, cliff bryan bluesco2000@yahoo.co.uk


I am Pat Archers sister Carole and my brother now lives abroad and is retired age 80.

I am Vanessa ...Dave Wendens daughter. Would love to hear from anyone who knew my dad x