The Rebel Rousers - Should I?/ As I Look 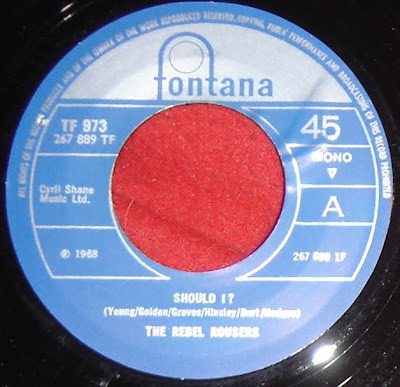 Cliff Bennett and the Rebel Rousers were club circuit regulars and occasional stars of the Hit Parade in Britain throughout most of the sixties. Whilst (somewhat surprisingly) most of their singles flopped, the hits "One Way Love" and "Got To Get You Into My Life" were big enough to create a reputation for the act which remains rather high. Combining some unexpectedly authentic and barely diluted soul sounds with just a dash of mod pop, their recordings are all worth checking out.

Less well recorded is what happened to the act after Cliff Bennett left the band (or was 'booted out' depending upon which story you believe) to form Toe Fat. Logically enough, they decided to continue as the plain old Rebel Rousers, and whilst Bennett's vocals are much missed on this single, the other elements remain intact. Both sides are equally strong, brittle and blaring pieces of brightly coloured pop created with the dancefloor in mind, and that the record wasn't a hit probably had more to do with the trends of the time than anything else - this sort of thing was incredibly passe by 1968, and Bennett's instincts to get a bit more sophisticated with Toe Fat seem, in this respect at least, less misguided than they may first appear. Still, the flip "As I Look" was later compiled as part of the "Chocolate Soup for Diabetics" series, and remains a favourite among retro DJs across the UK, regularly filling floors at mod nights. The copy I have is clearly a rather amateurishly produced bootleg made for the benefit of such wheel-of-steel spinners (I've never seen an original copy for sale anywhere) but it plays brilliantly despite the murky looking label.

The Rebel Rousers ran their course not long after this release, but two members Chas Hodges and David Peacock would have many more adventures together as the well-known (in Britain at least) cockney duo Chas and Dave, even utilising the services of Rebel Rousers drummer Mick Burt in the process. Prior to that, of course, Chas Hodges was a member of the unfairly overlooked seventies rockers Heads Hands & Feet who we have covered in some depth elsewhere on this blog.

As for Cliff Bennett, he became a shipping magnate in the seventies, but by the eighties could be persuaded to tour with a reformed Rebel Rousers on the nostalgia circuit. And there you have it - the circle is complete.