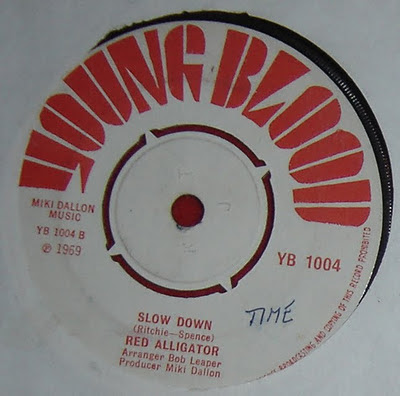 It's a bit difficult to know quite what to write about this one. As we all know, the sixties and seventies were shot though with session groups creating singles in the hope of scoring a hit. If the track stormed the charts, inevitably a touring group would then be created, some follow-ups, an album, and before too long everyone would be behaving as if they'd formed in the usual way. If it flopped, however, then follow-ups were unlikely, the band name got abandoned, and that remained the end of that.

Red Alligator are one such example of the latter phenomenon. Put together by producer Miki Dallon, who had previously had success working with The Sorrows, they seem to have been forgotten about within weeks of it becoming apparent that this single wasn't going to do the business. Sadly, the A-side "Real Cool" is a bit too scratched to upload here, but the flip "Slow Down" is something a few mod DJs have picked up on recently as being a bit of a mover - it's all slick grooves and mellow vocals, sounding like something straight outta cafe culture. You know a band means business when they hum on their records and you can visualise the Fonz clicking his fingers in your mind's eye.

Whatever the quality of their work, there is nothing left to be said about the band. It would be interesting to have some information about who the other members were and what else they went on to do - glam rock and pop, I'd be willing to warrant - but in the absence of that, all we have is the noise they created. And it's pretty good in itself, you know.