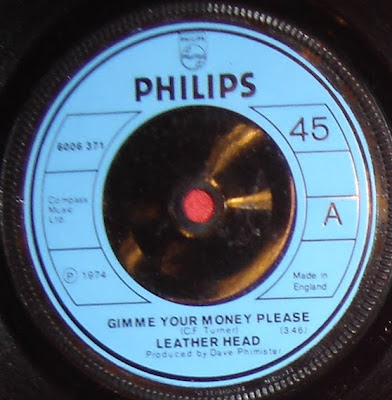 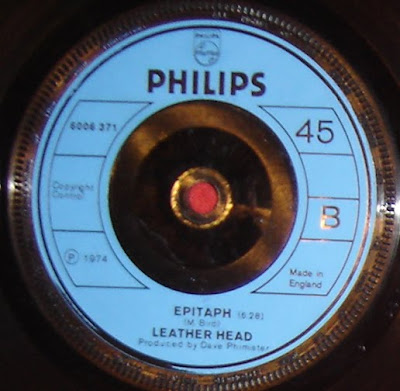 This one has already been featured over on the mighty PurePop blog, but sometimes when a record is this fantastic you have to spread the love around a little bit. For - and I have not a shred of doubt in my mind when I say this - the A-side "Gimme Your Money Please" sounds like one of the finest unrecognised proto-punk records ever. You be the judge.

Originally recorded by Bachman Turner Overdrive, their version of "Gimme Your Money Please" is a rather straightforward piece of rock and roll boogie, probably great if you like that kind of thing, but personally speaking it fails to hold my attention. One-record wonders Leather Head, on the other hand, took the original track, put a honking great electric organ behind it, spittle drenched vocals up front, and turned it into what was probably supposed to be a nod to the pub rock movement but actually sounds frighteningly like The Stranglers - and for once, I really don't think this is an idle, off-the-cuff comparison or a piece of lazy journalism, though I have no doubt that some punks will argue that Guildford's finest are merely an incorrectly classified pub rock band anyway. So huge is the resemblance to The Stranglers that there have even been minor Internet rumours in the past that the two bands were in some way aware of each other or linked, but even if the former is true (the actual town of Leatherhead from which the band derive their name is, after all, very close to Guildford) I'd suggest the latter is very unlikely. We may have to chalk this one up to coincidence and have done with it.

Anyone expecting a similarly "Rattus Norvegicus" shaped B-side will be hugely disappointed with "Epitaph", which is a six minute piece of mournful progressive rock utilising mellotrons (although I've a sneaking suspicion that some readers of this blog may go nuts for it - apologies for the pops and crackles for anyone who did hope to hear a clean, pristine version). One can only assume that at the time Philips snapped up Leather Head for a suck-it-and-see one single deal, they hadn't fully decided on their direction and created a single with two sides which were completely at odds with each other. Still, despite its pretentious lyrics "Epitaph" is not without its charms, and to be honest it's hard to understand how this single hasn't become a huge collector's item given that most obscure prog discs seem to go for vastly inflated sums nowadays, and Leather Head's take on the genre is actually quite convincing as well.

We are all still alive and kicking. Band was

We were all at school together, formed a band and did well locally. Spotted by a Philips A&R person we changed name [at their suggestion] to Leather Head as we all lived in Ashtead Surrey [2 miles from Leatherhead].

Did some interesting gigs mainly around London. Most memorable I guess was supporting a band called Stryder at the MARQUEE CLUB.

Single was a one off recorded at Marquee Studios and at Stanhope Place.

Thanks for all the information Geoff, and sorry it took me awhile to acknowledge it.

Please do let me know if you have any other Leatherhead news or updates (now or in the future). I'd be only too happy to keep the readers informed.