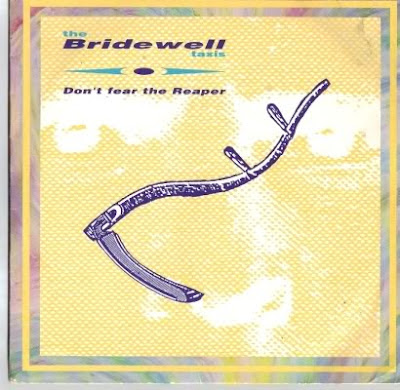 When I started this blog, I made a solemn vow not to make life too easy for myself all the time. Uploading a Moonshake EP is an example of going for the easy option, purely because precious few people would deny that whilst their noises may not have agreed with the popular ear, they certainly had imagination to spare. Going for the tough option, on the other hand, involves uploading items that received crap reviews as well as poor sales at the time not because they were misunderstood, difficult to get to grips with or ahead of the plot, just that the general consensus (which seems very unlikely to change whatever I say to the contrary) was that they were awful.

So then, The Bridewell Taxis' supposedly "Madchester" cover of Blue Oyster Cult's "Don't Fear the Reaper" was never going to get an easy ride. The fact that many of you are possibly laughing at that sentence alone speaks volumes. It came out at a point where many indie bands were scoring rogue hits with covers of classics, the biggest smash of which was undoubtedly Candy Flip's shameful "Strawberry Fields Forever", a record which does get raved about online now, but frankly I don't care if I never hear it again. It was increasingly being seen as an opportunistic move, an attempt to launch whole careers off the back of other people's good work which, as it happened, very seldom actually paid dividends.

Then there's the minor issue of the tastes of the early nineties - "Don't Fear The Reaper" was, as cover version choices go, inadvisable. Most bands at the time were idly whacking on funky drummer loops and wah-wah guitar to bog-standard covers of sixties classics to gain psychedelic cool points. The excesses of seventies adult rock hadn't really been explored yet, for the simple reason that music critics were still surprisingly sniffy about that era.

Given these walloping great facts, then, you could be forgiven for wondering what the case for the defence actually is. Primarily, I would argue that "Don't Fear The Reaper" is actually a really good song, but Blue Oyster Cult's original version of it has multi-tracked vocals so limping, anaemic and lifeless they sound like two lovers committing suicide by slowly drowning in porridge. Suffering from the worst kind of clinical seventies over-production, there's no emotion in the rendition at all, and a lot of nastily fussy guitar lines far too high up in the mix (and if you're reading this and shaking your head, you should probably be aware that I'd be happy to throw even worse insults at some album Pink Floyd did called "Dark Side of the Moon").

What The Bridewell Taxis did was create something which is definitely rougher, with squeaking organs where the guitars would normally be, a slightly harder, more agitated vocal, and some brilliant subtle use of brass which reminds me of the Salvation Army band on a weekend. It's a much more pleasing version which is more foggy and autumnal, but still manages to add some grit into the mix. And well... you can't deny that the driving riff was always a good one to start with.

It helps that I always did like The Bridewell Taxis too, a band who were much hyped by the NME and Melody Maker when they entered the music scene, then promptly forgotten about as soon as it became apparent they weren't going to go the distance. Despite the fact they hailed from Leeds, they were lumped in with the Manchester movement, which actually made precious little sense for reasons far beyond those of location. The noises they created appeared to owe a greater debt to the Northern alternative bands of the early eighties like The Teardrop Explodes and Wah! than any current white label spinning at the Hacienda. Their solitary trombone player also added a very low-budget Northern Soul effect, like some token, lo-fi nod to the mod movement.

Irrespective of whether they had press acclaim on their side or not, they appeared to suffer from line-up difficulties at an early hour, released an album called "Cage" as The Bridewells which contained none of their initial singles and was a huge disappointment, then disappeared. Nobody has mentioned them much since, and me bringing up their allegedly "ill advised" cover version isn't likely to do them many favours, but do take a look at the video for "Spirit" to see what else they could be capable of.

(This blog entry was originally uploaded in February 2009.  I have little to add now, and also no apologies to make, though I like "Dark Side of the Moon" a tiny bit more now than I did then.  Candy Flip also had some good tunes, though their version of "Strawberry Fields Forever" does not count among them).

Did you know you can create short links with AdFly and receive dollars for every visit to your short links.