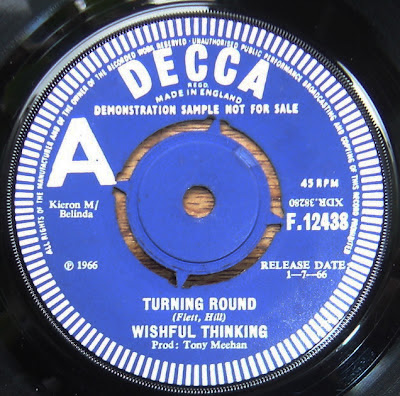 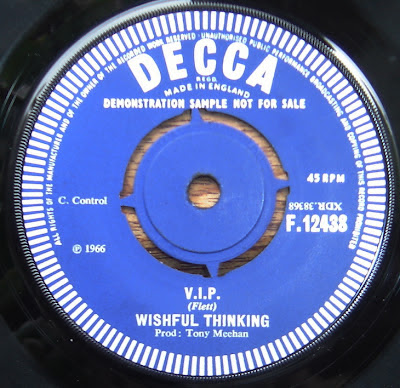 Generally speaking, Wishful Thinking have been a rather ignored group in the UK by aficionados of all things beat and psych until very recently.  This is a bizarre state of affairs given that they issued a string of singles on Decca in the sixties and eventually hit the big time on the continent in the seventies - or at least the charts - with their somewhat dramatic single entitled "Hiroshima", the lyrical contents of which I hopefully don't have to spell out.

Under the wing of yer man from The Shadows Tony Meehan their singles tended to involve Four Seasons and Beach Boys-esque harmony pop, and that's typified by the A-side on offer here which is a fair enough stab at that style, but pretty inessential.  Of far more interest is the scuzzy, buzzing garage pop of the B-side "VIP" which incorporates distortion, dumb riffs, thumping drums and demanding and aggressive vocals about the importance of one's other half.  "Stand right back she's a VIP!" the group demand like close harmonising thugs, "A VIP to me!" That's the way you treat a lady.  It's delightful stuff, the kind of knuckle-dragging sixties pop which tended to be more ubiquitous in the USA than on British shores, and it's a surprise this one has been relatively ignored - stylistically, it would sit neatly alongside Richard and The Young Lion's "Open Up Your Door", although admittedly it fails to quite scale the heights of that record.

Whilst the mention of their name is likely to cause blank expressions on the faces of their homeland dwellers, Wishful Thinking are still cultishly popular in Germany.  Of the original members Roy Daniels (vocals), Terry New (lead guitar), Roger Charles (bass) and Brian Allen (drums), sadly only Roy and Roger are still alive, but it's apparently not unknown for them to promote their work abroad where it's more appreciated.  A new album "Believing In Dreams" was even issued abroad in 2009. I doubt "VIP" features much in their workload, but it really should.

Of equal interest to me is a version of The Beach Boys "Vegetables" they apparently recorded for Decca in 1968 - if anyone has heard this, I'd be very interested to know quite how it turned out.

yeah, underestimated band. They used to be known as The Emeralds and had some equally overlooked 45s. "VIP" is one of their best, and I had intended to use it for the Tommyknockers, but it's already compiled on "Beat Us If You Can vol.1" Always a pleasure to visit your blog. Lolly P.

I thought this might be something you'd appreciate! Thanks for dropping by.