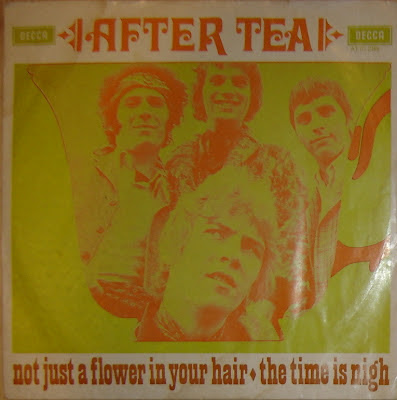 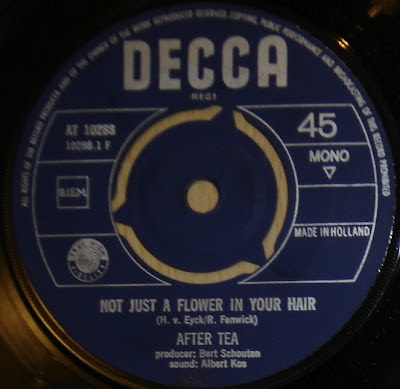 The Dutch music scene of the late sixties is an embarrassment of riches, and despite the fact that various compilation series - most prominently Rubble - have hoovered up a lot of the best material, a quick trip to an Amsterdam vinyl outlet can leave a buyer feeling spoiled for choice (as well as utterly bemused as to which records are duds and which ones are worth the asking prices quoted).  The Amsterdam music scene in particular out-freaked a great many of the oddest London bands, and initially moved Paul McCartney to once claim that it had a more finely developed underground than that city.

After Tea, however, can't claim complete and total membership of the Nederbeat clan, for they had ex-Syndicat Ray Fenwick on guitar at this point in their careers.  A mere one year after putting his instrument through grevious punishment with Joe Meek for "Crawdaddy Simone" he hopped across to the Netherlands to join After Tea, who were being formed by ex-member of The Tee Set Hans Van Eijck.  The band's name presumably served two purposes - to act as an homage to the Spencer Davies Group single of the same name, and also to insinuate that there was life for Hans beyond The Tee Set (in case this joke needed to be heavily highlighted for any of you readers).

This, their debut single, is a bit of a winner.  A-side "Not Just A Flower In Your Hair" is a piece of tongue-in-cheek Move inspired pop which chirps along confidently.  Whilst I suspect the song is as genuine a statement about hippy-dom as anything Scott MacKenzie produced, lovers of popsike will be pleasantly amused.

The B-side "The Time Is Nigh", on the other hand, is as mad as a bag of Jack Russells who have been fed acid-spiked dog treats, although the message seems to be in favour of abstinence from that particular drug.  "Throw your LSD away/ because meditation is the thing for today!" the group demand, whilst a swirling organ workout squawks along behind them, and various children manically "la la la" their way through their chorus.  Sounding like something existing between the theme music from "Rentaghost" and The Small Faces having a jam whilst on a cocktail of various conflicting drugs, this track is fully in keeping with some of the more berserk moments in the Dutch music scene of the time.

Sadly, as soon as Fenwick's work permit expired he was sent home and, through an interesting quirk of fate, joined the Spencer Davies Group to record "Time Seller".  After Tea plodded on without him back in the Netherlands and steadily became more progressive in their style, before eventually settling on a heavy rock/ blues sound for their final album "Joint House Blues".

52Nice slice of quirky psyche pop. Shame they went in a heavier direction, judging by te few youtube clips on offer.
Don't know if it's me, but I wonder if the people behind Spitting Image had heard 'Flower'. I found myself singing 'wave a chicken in the air/stick a deckchair up your nose' to parts of the melody line!

Hmmm... you may have a point there.