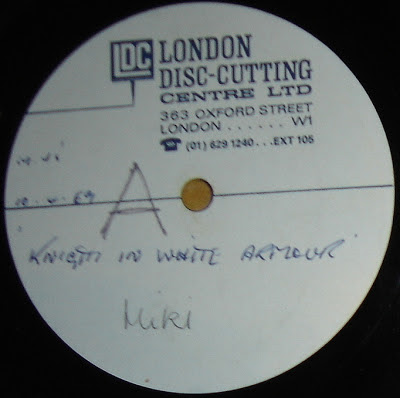 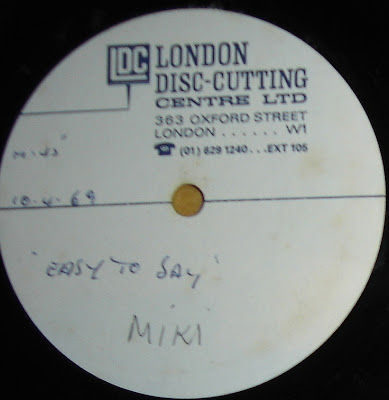 We took a quick look at Mark Wirtz's recording career back in June, focussing primarily on his "Teenage Opera" project which - it's fair to say - has overshadowed just about everything else he's done.  Wirtz did also attempt other commercial projects such as children's songs and straightforward attempts at pop (such as the single by Peanut we've already discussed) although none were ever really quite so ambitious as his tales of runaway trains and weak-hearted grocery store owners.

His flair for quality production work never subsided, however, and he saw out the rest of the sixties and the early seventies trying to score radio-friendly hits.  Whilst I'm drawing an utter blank on the identity of the performer Miki in this case (although the person who sold this to me suspected it may be the songwriter Miki Dallon, which I somewhat doubt) the work itself has the usual bright and theatrical detail you'd expect from something with Wirtz's name attached.  The first thirty seconds of this sound eerily like an eighties Marc Almond record, in fact, to the extent that I did briefly wonder if I'd been ripped off - the bleak lyrics, melodrama and West End stage enunciation of the lyrics is pure post-Soft Cell camp.  Whilst it never quite sparks into life as much as the verses seem to threaten, this is a brassy and likeable single with a little dash of popsike in its grooves.

Obviously the record didn't do big business when it was issued on RCA, although as I've never heard the official release I would be interested to know if this acetate contains any differences to the final version, as what I have here could be an incomplete edit or early master.  If anyone can help, please do leave a comment.  'Scuse the pops and clicks on the record.

Eagle-eyed readers will spot that the 363 Oxford Street address on the acetate label tallies with the HMV store's old location, meaning that either Wirtz or another studio representative will have nipped into their pressing facilities at the shop to get an acetate cut for promotional purposes.  This was the very same service Brian Epstein used to cut copies of The Beatles Decca demos, which George Martin later found out about from a HMV engineer who worked there - but that, my friends, is an entirely different story from a different time, and has little to do with the matter in hand.

The guy in question is Michael Derrick, who was a songwriter - often co-operating with Kris Ife - under the alias Miki Anthony. He wrote "Knight In White Armour" and "A Piece Of Heaven", the flip of his other RCA 45 in 69, "Dear Auntie Mary". Cheers, Lolly Pope.

Thanks so much for this information, which I think is the quickest I've ever been given an update on a record - twenty minutes after the blog post first appeared! I'll endeavour to investigate Michael Derrick's back-catalogue in more depth.

Made several singles also as Miki Antony, without the "h" ;-)