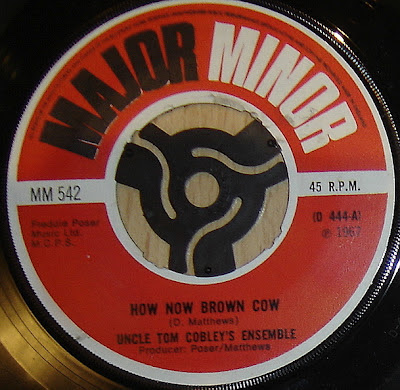 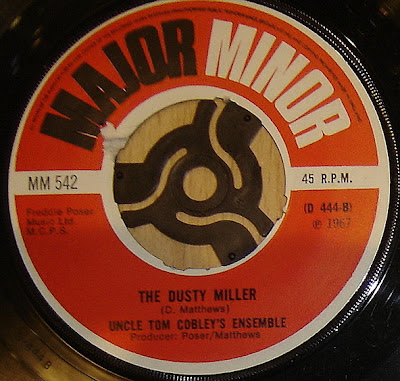 Knowing the response some of my other easy listening uploads have received over the course of this blog's history, this will probably piss as many people off as it delights.  For, make no mistake about it, Uncle Tom Cobley's Ensemble are not a peculiarly named psychedelic group, as wonderful as that might be - they're some kind of studio aggregation put together for this one single.  Sorry.

But apologies may not be necessary if you're in a chipper frame of mind.  I actually believe that "How Now Brown Cow" is a sprightly piece of work which, had they any sense, the remaining boutiques around Carnaby Street would still be playing on their sound systems.  Pitched somewhere between "Kaiser Bill's Batman" (whose success it was probably supposed to emulate)  and the incidental music for a comedy Brit-flick of the era, it bounces along with such verve that it makes you want to step outside the front door, grab your handbag (or man-bag) and head towards the Kings Road so you can swing it with vigour whilst skipping through Chelsea.  Or perhaps these are all just my issues.

It is what it is, frankly, and you'll either rate it as a pleasant period piece or something so stupid I shouldn't have bothered either buying it or uploading it.   And not for the first time, I'll warrant.

I don't know what anyone else would say, but I think these are two treasures. Thanks for sharing!

I'm glad you enjoyed the single! It's received slightly mixed reactions from my friends so far, but to my ears it's a perfectly good piece of work.