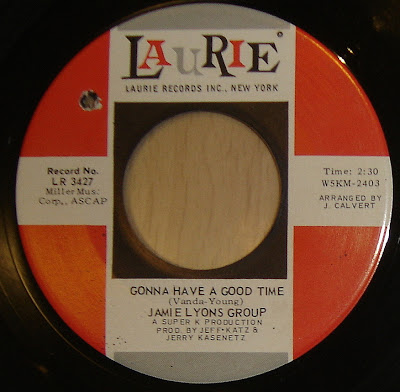 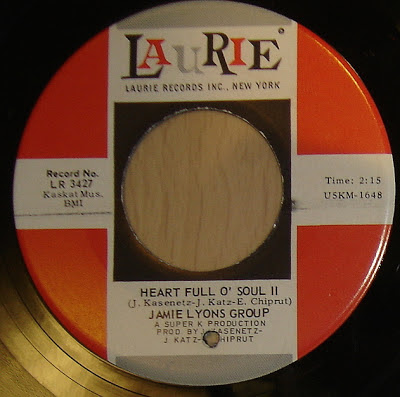 To start with, a guilty confession - I didn't walk into a record shop and buy this one.  On the contrary, the esteemed blogger of seventies obscurities and member of The Barracudas Robin Wills sold me a copy on ebay.  Mp3 bloggers bumping into each other on ebay is more common than you'd suppose, actually, and probably not all that surprising given the sheer amount of flotsam and jetsam there is cluttering up our houses.

Jamie Lyons was the lead singer with the brilliant Ohio garage rock band The Music Explosion who had a sizeable hit Stateside (though not, bafflingly, in the UK) with "A Little Bit Of Soul".  This release was presumably intended to create a profile for him as a solo star, and with a Harry Vanda and George Young penned A-side he probably should have had this one in the bag.  Sadly, the single perhaps lacks the bite of a lot of their other compositions and also the Music Explosion's output - it's a strong enough song which could have used a little more wildness in the studio.

The B-side, however, will definitely be of interest to mods who enjoy cool grooving, organ led instrumentals - "Heart Full O' Soul II" is a typical example of this fare and swings with pride and conviction.  Although almost all B-sides of this ilk were intended as throwaway items at the time, they're an utter boon to retro DJs in the present day, and this is a rather unlikely and unexpected source for one.

thanks, yes quite good but definitely under polished - don't know if Robin would describe himself as an 'ex' member of the Barracudas though!

Ha! Thanks, I've corrected that - I keep forgetting they've got a new single coming out (although Robin is keen not to let anyone forget that fact!)